No Excuses: The Making of a Head Coach (CD-Audio) 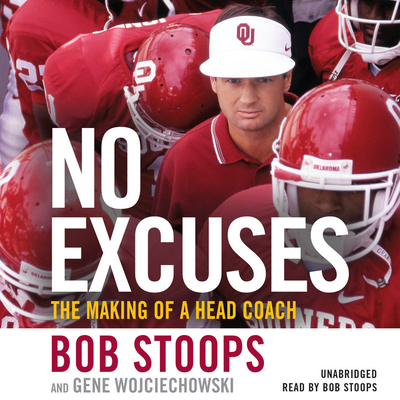 From the legendary Oklahoma coach, a candid and inspiring memoir.When Bob Stoops took over as football coach in 1999, the Oklahoma Sooners were in disarray with back-to-back losing seasons. But in just two years' time, Stoops achieved the seemingly impossible: winning a national championship and returning the struggling Sooners to their powerhouse status, churning out NFL talent, Heisman Trophy winners and conference championships, bowl wins and national title runs on a regular basis.During his 18 seasons at OU, his record was a remarkable 190-48. At only age 56, at the peak of his career, he stunned the college football world by walking away.For the first time, Bob opens up about his career alongside the evolution of the game itself. From his unlikely emergence as a star player at the University of Iowa, to his coaching apprenticeships under giants like Hayden Fry, Bill Snyder, and Steve Spurrier, Stoops recounts how the game he fell in love with as a boy has evolved into a billion-dollar business often compromised by recruiting wars, aggressive agents, overzealous boosters and alumni, and the emergence of the CEO head coach rather than mentor and teacher. Bob holds nothing back while explaining why it was time to step away from the game--and players--he still loves.Told with a rare combination of sincerity, vulnerability, and pure heart, No Excuses is both an engaging and eye-opening football memoir and an unprecedented portrait of a coach of one of the greatest legacy programs in the history of the college game.

Bob Stoops was the head football coach at the University of Oklahoma from 1999 until he announced his retirement in 2017. During the 2000 season, Stoops led the Sooners to an Orange Bowl victory and a national championship. Prior to coaching at Oklahoma, Stoops held various coordinator and position-coach positions at Iowa, Kansas State and Florida. Stoops was awarded the 2000 Paul "Bear" Bryant Award and the 2000 and 2003 Walter Camp Coach of the Year and has been nicknamed "Big Game Bob" by both supporters and detractors. He's also coached three Heisman trophy winners, including Jason White, Sam Bradford, and Baker Mayfield.
Gene Wojciechowski is a reporter for ESPN. He has authored or co-authored multiple best-sellers, including The Last Great Game: Duke vs. Kentucky, as well as autobiographies with Jerome Bettis and Paul Finebaum. He lives in Wheaton, Il.