The Last American State: Volume I: The War on Terror (Hardcover) 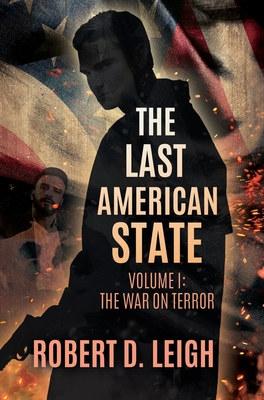 Army Intelligence and CIA operator Jack Claiborne is a patriotic Army Intelligence officer, Arabic linguist, Ultimate Fighter and history major who dedicates his life fighting Islamic terror and defending the nation against all enemies, 'foreign and domestic.' He quickly acquires Islamic terror mastermind Hafez Gamal Salafi as a life-long arch-enemy; a Russian-trained and highly-connected jihadist who carries a deadly vendetta against Jack for his choices in the fog of war.
Jack uncovers a world-wide Islamic terror plot to take down the United States. His patriotism and effectiveness are noted by powerful players--his globalist, progressive superiors and other powerful covert players--patriots like Jack in the government and abroad--that help him identify and fight his 'domestic' enemies. He finds himself hamstrung by his superiors to stop it. The 'domestic enemies' sign his paycheck while trying to get him killed on missions.
As Jack gathers friends and enemies and discovers the truth, he struggles against his own Post-Traumatic Stress Disorder, the hopelessness of a naive and oblivious public and the fear of being charged with treason to go around his corrupt superiors to defend America.
As Jack wages war around the world, here at home and in the dark corners of his nightmares, he finds the 'plausible deniability' to break the rules and turn the tables on his corrupt, globalist superiors. With his 'domestic enemies' finally checked for the moment, he and his team rescue a Mossad agent carrying hot intelligence out of Tehran and spirit him out to Israel. In their hair-raising escape Jack confronts Salafi and his life-long vendetta in a final, unforgettable showdown in the Jordanian desert.
Follow Jack Claiborne in his thrilling fight to 'preserve, protect and defend' America in this first installment of The Last American State series.
Robert D. Leigh is a psychiatric nurse, amateur historian and student of politics who, like Jack, is very concerned about the period of American History and politics we currently find ourselves in. He is, as this book goes to press, preparing a blog with which to record his wide-ranging observations and commentary on the current American scene, as well as featuring his current, related book projects, both fiction and non-fiction.