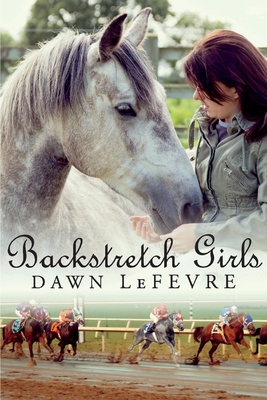 A rebellious ponygirl. A jockey tested by tragedy. A rejected racehorse. A three million dollar race.Teagan Sullivan is a golden disappointment in the show ring. To make matters worse, her family are big deal Olympic equestrians, so she skulks off to pony Thoroughbreds at a rundown racetrack. But while she excels at equine relations, she sucks at human ones—just ask her sexy blacksmith/sleepover buddy Screaming Wolf. And if she hadn't gone and rescued that stupid jockey wannabe Anne Simmons, she wouldn't be saddled with a new roommate, a broken down racehorse and a chance to prove herself to her family at last.Born two months premature to an anorexic mother, Anne was a longshot just to survive. Now eighteen, she arrives on the backstretch with nothing but a duffel bag and Derby dreams. But the horsemen don't trust the naïve newcomer, so she's stuck ponying horses instead of riding races. She is still chasing their respect when a near-fatal accident shatters her body—and her spirit. As Anne struggles to find the courage to ride again, Teagan wrestles with her feelings for Screaming Wolf. Horse racing's richest race, the Breeder's Cup Classic, offers them both a chance at redemption. Will Teagan and Anne conquer their fears in time to claim the things that they love most?

Dawn LeFevre began working on the backstretch of Atlantic City Racecourse at the age of sixteen. After graduating from Cook College of Rutgers University with a B.S. in Animal Science, she spent the next thirteen years training and racing horses in New Jersey, Pennsylvania and Delaware.Dawn currently works as a feature writer for www.pastthewire.com. Her fiction and nonfiction short pieces have been published in Equus, Weird NJ, the Pacific Coast Journal and The Press of Atlantic City.She lives in South Jersey with her husband Mark, Australian Shepherd Domino and two cats, Lynx and Tribble.You can check out her latest news and read her "Tales From the Wine Trails" blog at www.dawnlefevre.com.