She Represents: 44 Women Who Are Changing Politics . . . and the World (Paperback) | Northshire Bookstore
Skip to main content

She Represents: 44 Women Who Are Changing Politics . . . and the World (Paperback) 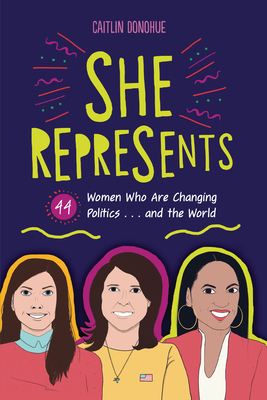 Whichever side of the political aisle you lean toward, it can seem like the only people in power are white men. But the balance is beginning to tip. Women are being elected at record rates and government is beginning to more accurately reflect the people it represents.

Read these profiles of forty-four women in leadership from both sides of the US political spectrum and from around the world to learn about their paths to power, their achievements and missteps, and their lasting legacies. Their stories teach us about the segments of society they represent through both their biographies and their actions in voting and policy decisions.

This book will show you what the road to power looks like for women in modern times. By showing up and representing women in the decisions that make or break a country, these leaders pave the way for future female politicians. Draw inspiration from these groundbreaking women to make a difference in your own world.In a complicated political era when the United States feels divided, this book celebrates feminism and female contributions to politics, activism, and communities. Each of the forty-four women profiled in this illustrated book has demonstrated her capabilities and strengths in political and community leadership and activism, both in the United States and around the world. Written in an approachable, journalistic tone and rounded out by beautiful color portraits, history, key political processes, terminology, and thought-provoking quotes, this book will inspire and encourage women everywhere to enact change in their own communities and to pursue opportunities in public affairs.

A timely introduction for budding feminists.--Booklist