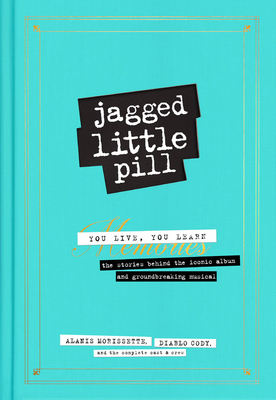 By Alanis Morissette (Introduction by), Full Cast (Commentaries by)
$40.00
Click Title for IN STOCK Location

Celebrating its 25-year anniversary in 2020, singer-songwriter Alanis Morissette's Grammy-Award winning album Jagged Little Pill has come to define a generation. In the "triumphant and moving" (Variety) Broadway musical of the same name, Morissette's iconic numbers -- including smash hits like "Ironic," "You Oughta Know," and "Hand in My Pocket," -- are paired with new songs by the beloved musician and a powerful original story by Academy Award-winning writer Diablo Cody (Juno). Hailed as "urgent, wildly entertaining, and wickedly funny" (The Boston Globe) and "joyful and redemptive, rousing and real" (The New York Times), the Jagged Little Pill musical is a poignant and emotionally revelatory experience that is speaking to audiences across generations.

Now, for the first time, this book will take you behind the scenes with stunning photography, original in-depth interviews with the cast, crew, Alanis Morissette, and Diablo Cody, and an introduction from Morissette herself on the album's genesis and journey from release to acclaimed musical -- including details and anecdotes on her collaboration on the show. Including the full annotated libretto and a retrospective look at Alanis's artistic influences and the significance of the album within the cultural context of the 90s as well as its long-term impact on the music world as we know it, this beautifully rendered book is a must-have keepsake for anyone who has been touched by this production or Morissette's music.

Alanis Morissette is one of the most influential singer-songwriter-musicians in contemporary music. Her deeply expressive music and performances have earned vast critical praise, fourteen Canadian Juno Awards, seven Grammy® Awards (with an additional fourteen nominations), a Golden Globe nomination and sales of more than sixty million albums worldwide. She also contributed musically to theatrical releases, some of which include The Chronicles of Narnia, Prince of Persia, and City of Angels.
In 2015, Alanis was inducted into the Canadian Music Hall of Fame. Alanis has also donated her time to a number of causes that help raise awareness and funding on a number of issues including Equality Now, Music for Relief, UN Global Tolerance, "Every Mother Counts" (a CD to which she contributed her song "Magical Child" to help prevent needless maternal deaths), and P.S. Arts. In 2016, Alanis launched "Conversation with Alanis Morissette," a monthly podcast that features conversations with a variety of revered authors, doctors, educators and therapists. www.alanis.com

Diablo Cody is an Academy Award-winning screenwriter of films including Juno, Young Adult, Jennifer's Body, Ricki and the Flash, and Tully. She also created the Emmy and Golden Globe-winning series United States of Tara alongside Steven Spielberg, and the WGA-nominated series One Mississippi with Tig Notaro. Through her company, Vita Vera Films, she continues to develop shows for both cable and broadcast television with Warner Brothers Studios. Jagged Little Pill marks her Broadway debut as playwright, following the musical's sold-out world premiere engagement at American Repertory Theater in Boston.

Matthew Murphy is the principal photographer for the production and the book. He specializes in theater photography and has shot for Hadestown, Moulin Rouge!, Ain't Too Proud, Beetlejuice, Waitress, and Harry Potter, among others. His photography is featured in the companion book to Hamilton, Come From Away, and Dear Evan Hansen.