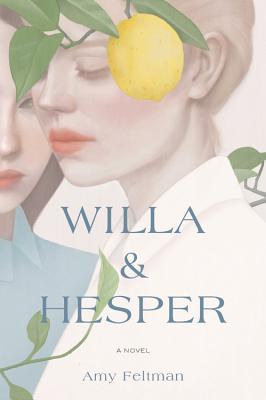 By Amy Feltman
Call or email to see if a used copy is available.
Hard to Find - May no longer be available

For fans of What Belongs to You by Garth Greenwell and The Futures by Anna Pitoniak, a soul-piercing debut that explores the intertwining of past and present, queerness, and coming of age in uncertain times.

Willa's darkness enters Hesper's light late one night in Brooklyn. Theirs is a whirlwind romance until Willa starts to know Hesper too well, to crawl into her hidden spaces, and Hesper shuts her out. She runs, following her fractured family back to her grandfather's hometown of Tbilisi, Georgia, looking for the origin story that he is no longer able to tell. But once in Tbilisi, cracks appear in her grandfather's history-and a massive flood is heading toward Georgia, threatening any hope for repair.

Meanwhile, heartbroken Willa is so desperate to leave New York that she joins a group trip for Jewish twentysomethings to visit Holocaust sites in Germany and Poland, hoping to override her emotional state. When it proves to be more fraught than home, she must come to terms with her past-the ancestral past, her romantic past, and the past that can lead her forward.

Told from alternating perspectives, and ending in the shadow of Trump's presidency, WILLA & HESPER is a deeply moving, cerebral, and timely debut

Amy Feltman graduated with an M.F.A. in Fiction from Columbia University in 2016, and now works at Poets & Writers Magazine. An excerpt from "Willa and Hesper" appeared in Cosmonauts Avenue, and her writing has also appeared in The Believer logger, The Toast, The Millions, The Rumpus, Lilith Magazine, Slice Magazine, and elsewhere. Her short story, "Speculoos," was nominated for a Pushcart Prize in 2016 and was long-listed for Glimmer Train's Short Story Award for New Writers. She lives with her partner in Astoria, NY.

"Willa & Hesper is a novel with a beating heart, a love story that is also an intricate love affair with time, history, religion and inheritance. In fresh and captivating prose, and spanning three vibrantly-rendered countries, Amy Feltman's debut enthralled me."
— Chloe Benjamin, New York Times bestselling author of The Immortalists

"A lyrical, timely story about love, heartbreak, and healing. Willa & Hesper explores religion, queerness, what it means to live in today's world in a female body, and the meaning of family in tight, absorbing prose. A beautiful debut by a striking new voice."—Crystal Hana Kim, author of If You Leave Me

"A debut novel for those who loved Everything is Illuminated, but updated with a queer-young-romance- twist. The title characters in Amy Feltman's Willa & Hesper find solace from their breakup in the rabbit holes of their European Jewish background."—New York Times Book Review

"Amy Feltman's debut novel is a joy to read, thrumming with inventive, playful language and filled with characters so finely drawn that they'll feel all too familiar. Willa and Hesper struggle to make sense of the histories, cities, traumas, and families that have shaped them - they struggle, in other words, to grow up. But in Feltman's hands, that universal tale feels utterly fresh and absorbing. With a sharp eye for detail and a lush sense of place whether we're in New York or Tbilisi, she has written an unforgettable story about love, grief, identity, and belonging."—Angelica Baker, author of Our Little Racket

"Willa & Hesper crystallizes a truth that haunts any of us who yearn to fall in love--our ability to be close to another person is always shaped by our secrets, our memories, our familial past. This debut is tender and tough, startlingly intimate, yet attuned to the larger troubles of our current political moment. A moving portrait of two young women, reckoning with themselves and their world, in hopes of finding their way back to one another."—Naima Coster, author of Halsey Street

"This is the queer, coming of age, complicated love story I've been wanting to read for
years. I wish I knew Willa and Hesper when I was in my twenties, though I still don't
know whose side I'd take after their break-up -- both are strange and smart and
compelling."— Katie Heaney, author of Never Have I Ever

"At once bittersweet and sharply funny, Willa & Hesper is a lovely meditation on how the trauma of the past intertwines with the future, fashioning our worldview no matter how hard we resist. Amy Feltman has a genius for imbuing the most specific of details with universal emotions. Both protagonists are urgently, imperfectly real, and you will miss them as much as they miss one another once their story is done."— Julia Fine, author of What Should Be Wild

"Feltman slices directly to the core of heartbreak's ugliest moments: the temptation to fall back into patterns, to keep running from intimacy and risks. She evocatively captures the tension between aching to move on and not give up, and how the shattering of one relationship fractures others. Feltman stays away from happy ending conventions and skillfully weaves glimmers of hope and healing throughout, making for a keenly perceptive novel."—Publisher's Weekly

"From Willa and Hesper, readers may see how relationships between twentysomethings, even when brief, have the potential to inspire unimaginable self-discovery.... Feltman's novel is as titillating and tense as the experience of young adult love."—Booklist

"Writing in alternating first-person chapters, Feltman renders each perspective with moving fidelity to her characters and their interior lives. When Willa worries that 'loving me had an expiration date' or Hesper feels 'radioactive with depression,' there's not a whiff of ironic distance or judgment. It's an impressive feat for any novelist working in the shadow of TV shows like HBO's Girls or novels like Emily Gould's Friendship, which attracted outsized criticism for their depictions of "unlikable" young women coming up in the city. The result is a deep and intimate portrait of two queer women in their mid-20s who come of age in New York while navigating-or refusing to navigate-their relationships to privilege, family, identity, and faith. What could be a novel about an intense attraction that falls apart is, in Feltman's hands, a bigger story about how people change us-and how we welcome or resist that change. A moving glimpse into 21st-century queer womanhood."—Kirkus

"Feltman tracing the paths of two young queer women (the titular Willa and Hesper): the rise and fall of their romance, the respective paths they take to mend their broken hearts (leading them to their ancestral lands of Tbilisi, Georgia, and the war sites of Germany) and their reckoning (or refusal to reckon with) their privilege. I'm always here for portrayals of 21st century queer life, and Willa and Hesper looks to be an excellent addition to the genre."—Literary Hub

"A haunting story of aching love and grief, desire and hope....There is no love like a young woman's love-strong and fine and grasping and consuming; it leaves a mark. Amy Feltman's debut novel, Willa & Hesper, is the story of such a love, and so, of course, it is also the story of heartbreak and longing, searches for identity, struggles to make sense of the world and of each other."—Nylon

"After crystallizing in the thrill of a new relationship, Feltman adeptly captures each progression of the stages of heartbreak. This is a cathartic break-up read if there ever was one."—Refinery29