Only Killers and Thieves (Compact Disc) 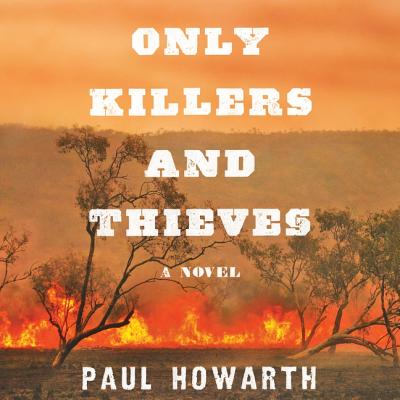 A heart wrenching story of a child forced to lose his innocence. Set in the Australian outback in the years of settlement, Only Killers And Thieves is a brutal filleting of frontier life, race relations, and the ambition of men. The characters are unforgettable and the writing is effortless yet juicy. Such a great read.

After their parents are murdered, two brothers join in the search for the killer with a fanatical inspector in the Native Police, whose authority-sanctioned mission is to exterminate a tribe of Aborigines in Australia in the 1880s. What begins as a quest for revenge soon degenerates into a coming-of-age nightmare for the two teenagers as they are drawn into a miasma of death and depravity. Written in prose as brutal and unsparing as the landscape in which it is set.

“An unforgettable first line propels this debut novel about two brothers on the Australian frontier who are drawn into a world of conflict and revenge that tests their beliefs and morals to the ultimate degree. The age-old conflict between settlers and indigenous people is played out on the southern continent much as it was in the American West and Russian East. As the brothers become deeply embroiled, they enter a savage and unforgiving landscape, both physically and culturally, and it becomes the ultimate test of their growth and humanity. This is a work that is as unrelenting as the world it describes and will long linger with the reader.”
— Bill Cusumano, Square Books, Oxford, MS

Two brothers are exposed to the brutal realities of life and the seductive cruelty of power in this riveting debut novel--a story of savagery and race, injustice and honor, set in the untamed frontier of 1880s Australia--reminiscent of Philipp Meyer's The Son and the novels of Cormac McCarthy.

An epic tale of revenge and survival, Only Killers and Thieves is a gripping and utterly transporting debut, bringing to vivid life a colonial Australia that bears a striking resemblance to the American Wild West in its formative years.

It is 1885, and a crippling drought threatens to ruin the McBride family. Their land is parched, their cattle starving. When the rain finally comes, it is a miracle that renews their hope for survival. But returning home from an afternoon swimming at a remote waterhole filled by the downpour, fourteen-year-old Tommy and sixteen-year-old Billy meet with a shocking tragedy.

Thirsting for vengeance against the man they believe has wronged them--their former Aboriginal stockman--the distraught brothers turn to the ruthless and cunning John Sullivan, the wealthiest landowner in the region and their father's former employer. Sullivan gathers a posse led by the dangerous and fascinating Inspector Edmund Noone and his Queensland Native Police, an infamous arm of British colonial power charged with the dispersal of indigenous Australians to protect white settler rights. As they ride across the barren outback in pursuit, their harsh and horrifying journey will have a devastating impact on Tommy, tormenting him for the rest of his life--and will hold enduring consequences for a young country struggling to come into its own.

Recreating a period of Australian and British history as evocative and violent as the American frontier era, Only Killers and Thieves is an unforgettable story of family, guilt, empire, race, manhood, and faith that combines the insightfulness of Philipp Meyer's The Son, the atmospheric beauty of Amanda Coplin's The Orchardist, and the raw storytelling power of Ian McGuire's The North Water.