The Beat, the Scene, the Sound: A Dj's Journey Through the Rise, Fall, and Rebirth of House Music in New York City (Hardcover) 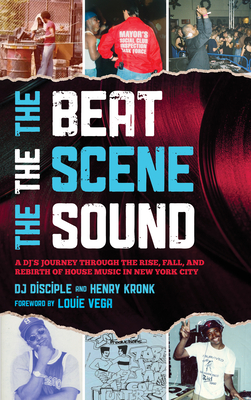 DJ Disciple is a Black artist, DJ, radio host, producer, and community advocate and has toured the world over a forty-year career, playing venues such as Studio 54 in New York, Ministry of Sound in London, and Cream in Ibiza. His GRAMMY-nominated track "Caught Up" reached #1 on the US Billboard Hot Dance Club Play chart in 2002 and was later featured in the Showtime series Queer as Folk. He won an ARIA music award for his remix of Steven Allkins' "The Bass Has Got Me Movin.'" His website is http: //djdisciple.net/ and he is based in Brooklyn, New York. Henry Kronk is a freelance journalist who has covered a range of subjects over the course of his career. His non-fiction work has appeared in Exclaim!, the Burlington Free Press, International DJ, Vallum: Contemporary Poetry, and more. In 2018, he produced the investigative radio program and podcast Code Burst. He lives in Burlington, Vermont.