The Other Talk: Reckoning with Our White Privilege (Paperback) 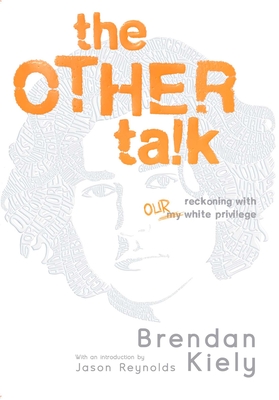 A School Library Journal Best Book of the Year

Award-winning and New York Times bestselling author Brendan Kiely starts a conversation with white kids about race in this “well-executed and long overdue” (Kirkus Reviews, starred review) introduction to white privilege and why allyship is so vital.

Talking about racism can be hard, but...

Most kids of color grow up doing it. They have “The Talk” with their families—the honest talk about survival in a racist world.

But white kids don’t. They’re barely spoken to about race at all—and that needs to change. Because not talking about racism doesn’t make it go away. Not talking about white privilege doesn’t mean it doesn’t exist.

The Other Talk begins this much-needed conversation for white kids. In an instantly relatable and deeply honest account of his own life, Brendan Kiely offers young readers a way to understand one’s own white privilege and why allyship is so vital, so that we can all start doing our part—today.

Brendan Kiely is the New York Times bestselling author of All American Boys (with Jason Reynolds), Tradition, The Last True Love Story, and The Gospel of Winter. His most recent book is The Other Talk: Reckoning with Our White Privilege. His work has been published in over a dozen languages, and has received the Coretta Scott King Author Honor Award, the Walter Dean Meyers Award, and ALA’s Top Ten Best Fiction for Young Adults. A former high school teacher, he is now on the faculty of the Solstice MFA Program. He watches too much basketball and reads too many books at the same time, but most importantly, he lives for and loves his wife and son. Find out more at BrendanKiely.com.

Jason Reynolds is a #1 New York Times bestselling author, a Newbery Award Honoree, a Printz Award Honoree, a two-time National Book Award finalist, a Kirkus Award winner, a Carnegie Medal winner, a two-time Walter Dean Myers Award winner, an NAACP Image Award Winner, a two-time Odyssey Award Honoree, and the recipient of multiple Coretta Scott King honors. He’s also the 2020–2022 National Ambassador for Young People’s Literature. His many books include All American Boys (cowritten with Brendan Kiely); When I Was the Greatest; The Boy in the Black Suit; Stamped; As Brave as You; For Every One; the Track series (Ghost, Patina, Sunny, and Lu); Look Both Ways; Stuntboy, in the Meantime; Ain’t Burned All the Bright, and My Name Is Jason. Mine Too. (both cowritten with Jason Griffin); and Long Way Down, which received a Newbery Honor, a Printz Honor, and a Coretta Scott King Honor. He lives in Washington, DC. You can find his ramblings at JasonWritesBooks.com.