Department of Truth, Volume 2: The City Upon a Hill (Paperback) 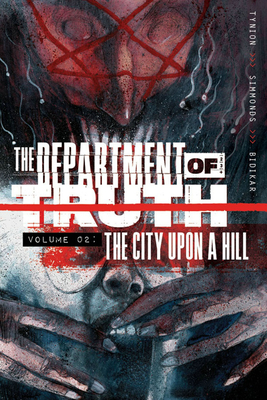 An intriguing story told in beautifully moody, fractured imagery (maybe even subliminal messaging) with the atmosphere of a particularly electrical summer storm, featuring everything anyone is afraid of with the seemingly only exceptions being spiders and public speaking, swirling around a truth as convoluted as beliefs and superstitions. It's really great; you almost expect to hear the X-Files music. CW: Government indiscriminately harming its citizens under the guise of "protecting" them. — Arabella Peterson

Cole Turner thought he joined the right side of the war for the Truth. But now that he's learning more about Lee Harvey Oswald's tenure leading the Department, he's not so sure. And as Tulpas start to gain a stronger foothold in the real world, Cole's time to decide where he stands is running out... The second arc of the smash-hit DEPARTMENT OF TRUTH from James Tynion IV (Batman) and Martin Simmonds (Dying is Easy) is collected here Collects THE DEPARTMENT OF TRUTH #8-13