Department of Truth, Vol 1: The End of the World (Paperback) 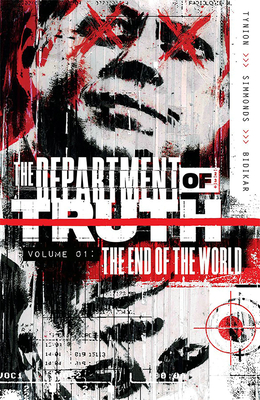 Belief is a very powerful thing, it can inspire the hopeless, start wars, or spark revolutions. But what if it had the power to change reality itself? There exists a secret branch of the government, the aptly named Department of Truth, who are tasked with controlling the spread of conspiracy theories because with enough belief, theorists can shift the scales making the theory into reality. Imagine how much damage it would do if enough people suddenly believed that the world was flat? With enough belief suddenly we could fly out to the void at the end of the world and stare off into nothingness, that is the world our protagonist Cole Turner finds himself in, after seeing the power of belief first hand at the edge of the world he is approached to join the Department of Truth, but controlling the narrative has been happening for longer than Cole realized and he’ll soon find out the truth can be just as dangerous as the lie. — Jordan Starks

Best of 2021 Lists:
New York Public Library
Entertainment Weekly
Indigo
And more... "A wonderfully dizzy mixture of Men in Black, John Carpenter, Stephen King, The Matrix, and 1970s conspiracy thrillers."- Forbes "A story for our zeitgeist. SIMMONDS' art invokes Bill Sienkiewicz."- Entertainment Weekly "It is FANTASTIC. Can't wait to read the whole series "- Patton Oswalt COLE TURNER has studied conspiracy theories all his life, but he isn't prepared for what happens when he discovers that all of them are true, from the JFK Assassination to Flat Earth Theory and Reptilian Shapeshifters. One organization has been covering them up for generations. What is the deep, dark secret behind the Department of Truth? From bestselling writer JAMES TYNION IV (BATMAN, SOMETHING IS KILLING THE CHILDREN) and breakout artist MARTIN SIMMONDS (DYING IS EASY) Collects DEPARTMENT OF TRUTH #1-5