The Stars Are Fire: A novel (Large Print / Paperback) 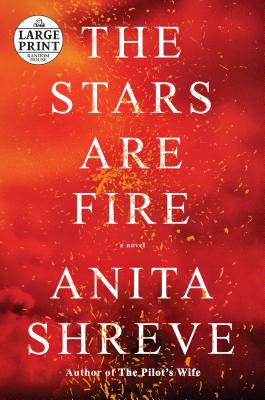 From the New York Times best-selling author of The Weight of Water and The Pilot's Wife (an Oprah's Book Club selection): an exquisitely suspenseful new novel about an extraordinary young woman tested by a catastrophic event and its devastating aftermath--based on the true story of the largest fire in Maine's history

In October 1947, after a summer long drought, fires break out all along the Maine coast from Bar Harbor to Kittery and are soon racing out of control from town to village. Five months pregnant, Grace Holland is left alone to protect her two toddlers when her husband, Gene, joins the volunteer firefighters. Along with her best friend, Rosie, and Rosie's two young children, Grace watches helplessly as their houses burn to the ground, the flames finally forcing them all into the ocean as a last resort. The women spend the night frantically protecting their children, and in the morning find their lives forever changed: homeless, penniless, awaiting news of their husbands' fate, and left to face an uncertain future in a town that no longer exists. In the midst of this devastating loss, Grace discovers glorious new freedoms--joys and triumphs she could never have expected her narrow life with Gene could contain--and her spirit soars. And then the unthinkable happens--and Grace's bravery is tested as never before.

ANITA SHREVE's novels have sold more than six million copies and have been translated into thirty-six languages. She lives with her husband in New Hampshire.