Younger Next Year: Live Strong, Fit, Sexy, and Smart—Until You’re 80 and Beyond (Paperback) 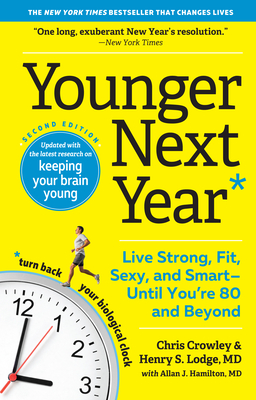 Congratulations, you are about to get younger!

Dr. Henry Lodge provides the science. Chris Crowley provides the motivation. And through their New York Times bestselling program, you’ll discover how to put off 70 percent of the normal problems of aging—weakness, sore joints, bad balance—and eliminate 50 percent of serious illness and injury. Plus, prominent neurologist Allan Hamilton now explains how following “Harry’s Rules” for diet, exercise, and staying emotionally connected directly affects your brain—all the way down to the cellular level. The message is simple: Learn to train for the next third of your life, and you’ll have a ball.

Chris Crowley, a former litigator (Davis Polk & Wardwell), is the coauthor, with Henry S. Lodge, of the Younger Next Year books, and the coauthor, with Jen Sacheck, PhD, of Thinner This Year. Though in his eighties, he fully lives the life, skiing black diamonds and routinely doing thirty-mile bike rides. He and his wife live in Connecticut and New York City.

Henry S. Lodge, MD, FACP, listed variously as “One of the Best Doctors in New York/America/the World,” headed a twenty-doctor practice in Manhattan and was the Robert Burch Family Professor of Medicine at Columbia University Medical Center.

Allan J. Hamilton, MD, is a Harvard-trained brain surgeon, a renowned horse trainer, a developer of equine-assisted learning programs, and the author of Lead with Your Heart and Zen Mind, Zen Horse (Gold Nautilus Award winner). He is a professor of neurosurgery at the University of Arizona and a medical script consultant for the hit television series Grey’s Anatomy. He raises Lipizzan horses on a small ranch on the outskirts of Tucson, Arizona.