The Boys of Winter: The Untold Story of a Coach, a Dream, and the 1980 U.S. Olympic Hockey Team (Compact Disc) 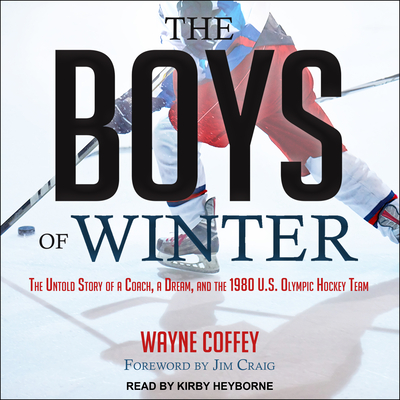 This is an exceptionally well-written sports book which tells a story that has somehow never been properly told before. The author, who has previously written primarily instructional books (ie, Winning Basketball for Girls, as well as Winning Sounds like Thisa popular history of Gallaudet University) has turned out a work that becomes very interesting for its originality. He deftly avoids the pitfalls of sentimentality and jingoism often associated with the 80 Olympics, interweaving capsule profiles of the players with a chronological account of the games leading up to the semifinals against the USSR, and the final against Finland. It's all written with a light and sensitive touch--the players themselves are such fascinating characters that they don't require any embellishment, and Coffey provides ample research and contemporary interviews. It should appeal widely to a general readership, and not just hockey fans.

Once upon a time, they taught us to believe. They were the 1980 U.S. Olympic hockey team, a blue-collar bunch led by an unconventional coach, and they engineered perhaps the greatest sports moment of the twentieth century. Their �Miracle on Ice� has become a national fairy tale, but the real Cinderella story is even more remarkable. It is a legacy of hope, hard work, and homegrown triumph. It is a chronicle of everyday heroes who just wanted to play hockey happily ever after. It is still unbelievable. The Boys of Winter is an evocative account of the improbable American adventure in Lake Placid, New York. Drawing on hundreds of hours of interviews, Wayne Coffey explores the untold stories of the U.S. upstarts, their Soviet opponents, and the forces that brought them together.