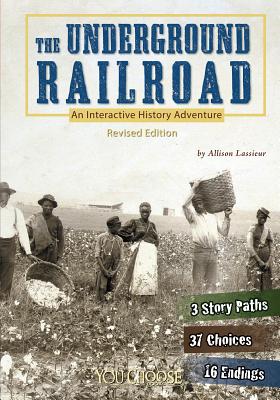 By Allison Lassieur
$6.95
Email or call for price.

Starting in colonial times, thousands of African people were kidnapped and brought to the United States, where they were enslaved. Those who escaped were often caught, and, if so, treated harshly, or even killed, as were those who tried to help them escape. But that didn't stop brave people from trying. By the 1850s an escape method dubbed the Underground Railroad was in full swing. Though it wasn't a railroad, but a network of people helping enslaved people escape to the northern United States and Canada, it used railroad terms such as conductor and station. Imagine you were an enslaved person in the 1850s, desperate to escape to freedom, or a helper on the railroad, taking great risks so others could escape to freedom. The Underground Railroad lets you choose a path ... to freedom or capture and, perhaps, death.