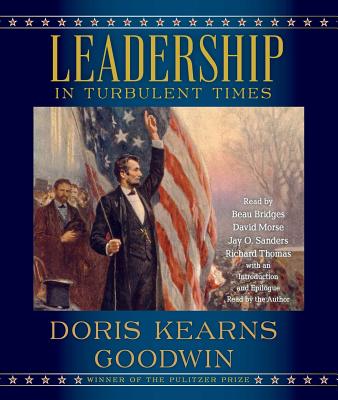 By Doris Kearns Goodwin, Intro and Afterword Read by the Author (Read by)
$49.99
Special Order

Goodwin does it again! This is a fantastic book which combines history, storytelling and the revelation of the very human travails of some of our nation's best leaders. The book bounces between the lives of four presidents - Lincoln, the two Roosevelts, and Johnson - to illustrate the leadership qualities they possessed and the path that got them to that point in their lives. All of these men faced major obstacles, depression and turbulent times. But they all were able to summon their best selves at crucial moments in our nation's history. Eminently readable and interesting.

The story of four extraordinary presidents during extraordinary times. Goodwin recounts events that indelibly shaped the characters of Abraham Lincoln, Theodore Roosevelt, Franklin Roosevelt, and Lyndon Johnson, examining how personal trials of each man profoundly affected their response during some of the nation's darkest hours. Eminently readable, this book will instill in the reader a new appreciation for men whose determination and courage still resonate in America today.

The New York Times bestselling book about the early development, growth, and exercise of leadership from Pulitzer Prize-winning author Doris Kearns Goodwin “should help us raise our expectations of our national leaders, our country, and ourselves” (The Washington Post).

“After five decades of magisterial output, Doris Kearns Goodwin leads the league of presidential historians” (USA TODAY). In her “inspiring” (The Christian Science Monitor) Leadership, Doris Kearns Goodwin draws upon the four presidents she has studied most closely—Abraham Lincoln, Theodore Roosevelt, Franklin D. Roosevelt, and Lyndon B. Johnson (in civil rights)—to show how they recognized leadership qualities within themselves and were recognized as leaders by others. By looking back to their first entries into public life, we encounter them at a time when their paths were filled with confusion, fear, and hope.

Leadership tells the story of how they all collided with dramatic reversals that disrupted their lives and threatened to shatter forever their ambitions. Nonetheless, they all emerged fitted to confront the contours and dilemmas of their times. At their best, all four were guided by a sense of moral purpose. At moments of great challenge, they were able to summon their talents to enlarge the opportunities and lives of others. Does the leader make the times or do the times make the leader?

“If ever our nation needed a short course on presidential leadership, it is now” (The Seattle Times). This seminal work provides an accessible and essential road map for aspiring and established leaders in every field. In today’s polarized world, these stories of authentic leadership in times of apprehension and fracture take on a singular urgency. “Goodwin’s volume deserves much praise—it is insightful, readable, compelling: Her book arrives just in time” (The Boston Globe).