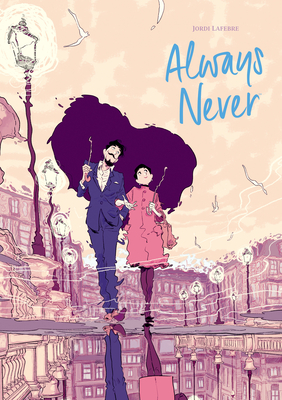 After forty years of being madly in love, Ana and Zeno are finally retiring and giving their romance a chance to bloom while they both still have time left. A unique but relatable love story told in reverse, with each chapter stepping further back through the decades of touch and go courting, showing both the heartbreaking moments that kept the two lovers apart and the beautiful moments that kept their flame alive. This isn't a tale of missed connections and regret but rather a story celebrating the complexities of family, responsibility, destiny, and how love persists across time with complete disregard for all of that.

Ana is a brilliant, headstrong, and compassionate mayor of a small city, with a lovely husband, daughter, and granddaughter.  Yet there has been a lingering piece of her life missing -- a thread of happiness she hasn't been able to pull on for most of her life. Zeno, a lifelong bachelor, bookstore owner, intrepid traveler, and theoretical physicist determined to figure out how to turn back time. Handsome, clever, and kind, he is often questioned about his failure to "settle down." Over the years, they have woven together an impossible and inexhaustible love. Their paths constantly intertwining, from a chance meeting on a boat to clumsily bumping into each other in the city they share. Eventually keeping in touch by letters and late-night phone calls across the world.

A luxuriously illustrated love story full of heart, comedy and universal truths, published in English for the first time. Written and illustrated by Spanish cartoonist Jordi Lefebre, co-creator and artist of the graphic novel series Glorious Summers, as well as La Mondaine, and Lydia.

Jordi Lafebre is a Spanish illustrator and comic book artist active in the Franco-Belgian market. Lafebre was born in Barcelona. After studying drawing at the University of Barcelona and comics at the Joso School in Barcelona, he started working in 2001 as an illustrator for advertisements and various magazines in Spain (including Nobanda, Penthouse Comix and Wet Comix). In the children's magazine Mister K, he published El mundo de Judy on a script by Toni Font. His meeting with the Belgian scriptwriter Zidrou, who lives in Spain, will be decisive: with him, Jordi Lafebre drew some short stories published in Le Journal de Spirou, which would be included in two collective albums La vieille dame qui n'avait jamais joué au tennis et autres nouvelles qui font du bien (The old lady who never played tennis and other good news) and Joyeuses nouvelles pour petits adultes et grands enfants (Happy news for small adults and big children), then launch into one-shots with Lydie and La Mondaine, before starting the series Les Beaux étés (Glorious Summers). In parallel to his career as an author, Jordi Lafebre is a teacher at the Joso School in Barcelona.

“This book is about a different shape and kind of love. Make no mistake about it — this is a lighthearted romantic drama set across a long span of time. Nobody gets powers all of a sudden. Nobody turns the corner to see a monster… It’s Romantic. Drama. And it is Awesome”—Pipeline Comics