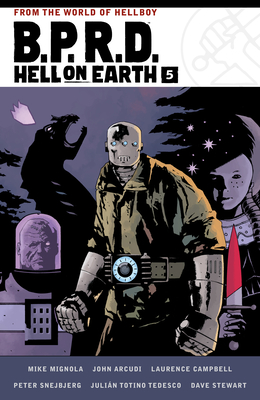 It’s the final chapter for Hell on Earth!


Hell on Earth comes to an end when the B.P.R.D. must defend Earth from one of the mythical Ogdru Jahad, the dragon believed to bring about the end of the world. The agents must destroy the dragon and the countless monsters it creates. Elsewhere, Russian occult director seeks help from a demon as he follows her through Hell.

A new paperback edition of spine-tingling horror collects B.P.R.D.: Hell on Earth volumes 12-13 and 15, plus bonus material from writers Mike Mignola and John Arcudi and artists Laurence Campbell, Peter Snejbjerg, and others!

John Arcudi is a comic book writer and creator from Buffalo, New York. Arcudi has more than 300 titles to his name, some of the most prominent being Abe Sapien, B.P.R.D., The Creep, Dark Horse Presents, and Predator. Arcudi was educated at Columbia University.

Laurence Campbell is a comic book artist, penciller, and inker. He is known for his work on B.P.R.D., Sledgehammer 44, Punisher, Wolverine, Judge Dredd, Deadpool, and other comic book titles.

You can find out more about Campbell and his work at getcampbell.com/home.