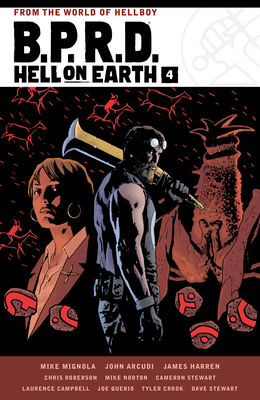 The B.P.R.D takes on the apocalypse!


The B.P.R.D. continues to lead the defense against the apocalyptic Ogdru Hem from Japan to America, as the team splits up and Kate is possessed. Howards and a team of agents find themselves attempting to liberate a small town that holds secrets from Howards' Hyperborean past. Elsewhere, B.P.R.D. field agent Ashley Strode attempts to purge a demon from a 100-year-old exorcist, setting her on a path to battling a demon who is kidnapping and eating children.

A new format for this collection of spine-tingling horror from Mignola and others, this edition collects B.P.R.D. Hell on Earth volumes 10-11 and 14, for the first time in paperback, plus bonus material!