Operation Relentless: An SAS Veteran's Hunt for the World's Most Wanted Man--Russian Fugitive "The Lord of War (Paperback) 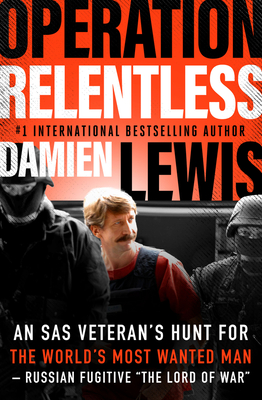 The true story of the top-secret mission to capture the Russian billionaire arms dealer, the Merchant of Death: "This is James Bond meets Jason Bourne" (Bear Grylls, star of Man vs. Wild).

Viktor Bout was the world's foremost arms dealer. From his hideout in Moscow, he masterminded the sale of weapons to dictators, rebels, despots, and terror groups worldwide-supplying anything from AK-47s to state-of-the-art helicopter gunships and anti-aircraft missiles. Known as the Merchant of Death, he was hunted by MI6, INTERPOL, the CIA, the NSA, and more. But the former KGB officer was shielded by a Russian state that partnered in his dark dealings.

Evading capture for years, Bout appeared utterly invulnerable. Then elite forces veteran Mike Snow, AKA The Bear, stepped forward. Snow had gotten to know Bout while working as a bush pilot in war-torn Africa. When the Drug Enforcement Agency approached Snow through a secretive, shadow network, they had one question for him: could he ensnare the Merchant of Death?

This is the real-life tale of Operation Relentless, the classified mission masterminded by Snow and a team of DEA operatives. Based on first-hand testimonies, it is the thrilling tale of a manhunt that ranges from the jungles of Colombia to the streets of Moscow, from horrific bloodshed and tyranny in Afghanistan to a snatch operation like no other.

Damien Lewis is a bestselling author whose books have been translated into over forty languages worldwide. For decades he worked as a war and conflict reporter for the world's major broadcasters, reporting from Africa, South America, the Middle and Far East, and winning numerous awards. Lewis's books include the #1 international bestseller Zero Six Bravo; the World War II classics Hunting the Nazi Bomb, The Ministry of Ungentlemanly Warfare, and The Nazi Hunters; and the war dog books The Dog Who Could Fly and A Dog Called Hope. A dozen of his books have been made, or are being made, into movies or television drama series and several have been adapted as plays for the stage. Lewis has raised tens of thousands of dollars for charitable concerns connected to his writings.