Not for You: Pearl Jam and the Present Tense (Paperback) 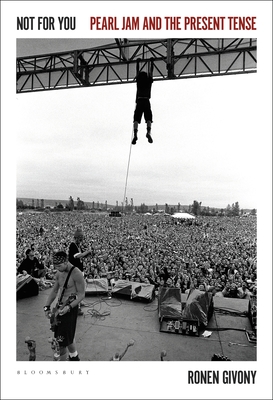 A backstage pass to the story of Pearl Jam, written by a fan trying to understand why this band means so much to him and how they came to be one of the most influential bands of a generation. Givony covers their journey from playing small Seattle clubs to selling out massive arenas, all while maintaining the integrity of the influential music they continue to make. There is a lot of emphasis on the live performances which have made Pearl Jam legendary, as well as their willingness to stand up for progressive causes even when doing so hurt their career. Givony doesn't shy away from the contradictions of a band that claims to not want fame while at the same time seeking to become the biggest band in the world; a goal they actually achieved. A must read for any Pearl Jam fan and anyone looking to understand the culture they influenced with their music and their activism. — Allen Boulet

There has never been a band like Pearl Jam. The Seattle quintet has recorded eleven studio albums; sold some 85 million records; played over a thousand shows, in fifty countries; and had five different albums reach number one. But Pearl Jam's story is about much more than music. Through resilience, integrity, and sheer force of will, they transcended several eras, and shaped the way a whole generation thought about art, entertainment, and commerce.

Not for You: Pearl Jam and the Present Tense is the first full-length biography of America's preeminent band, from Ten to Gigaton. A study of their role in history - from Operation Desert Storm to the Dixie Chicks; Jeremy to Columbine; Kurt Cobain to Chris Cornell; Ticketmaster to Trump - Not for You explores the band's origins and evolution over thirty years of American culture. It starts with their founding, and the eruption of grunge, in 1991; continues through their golden age (Vs., Vitalogy, No Code, and Yield); their middle period (Binaural, Riot Act); and the more divisive recent catalog. Along the way, it considers the band's activism, idealism, and impact, from "W.M.A." to the Battle of Seattle and Body of War. More than the first critical study, Not for You is a tribute to a famously obsessive fan base, in the spirit of Nick Hornby's Fever Pitch. It's an old-fashioned - if, at times, ambivalent - appreciation; a reflection on pleasure, fandom, and guilt; and an essay on the nature of adolescence, nostalgia, and adulthood. Partly social history, partly autobiography, and entirely outspoken, discursive, and droll, Not for You is the first full-length treatment of Pearl Jam's odyssey and importance in the culture, from the '90s to the present.

Ronen Givony is the founder/producer of New York's Wordless Music series and orchestra (wordlessmusic.org), and the founding music director of the concert venue Le Poisson Rouge. A native of South Florida, he has worked for Nonesuch Records and Lincoln Center, and received his bachelor's and master's degrees in English literature from Yale University. He is the author of Jawbreaker's 24 Hour Revenge Therapy (2017), part of Bloomsbury's 33 1/3 series.