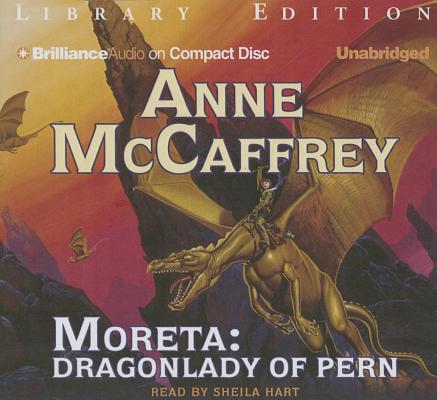 By Anne McCaffrey, Sheila Hart (Read by)
Call or email to see if a used copy is available.
Hard to Find - May no longer be available

This is book number 7 in the Dragonriders of Pern (Audio) series.

An air of pleasant anticipation hung so thickly over the Halls, Holds, and Weyrs of Pern that it had affected even the businesslike ways of Moreta, the Weyrwoman of Fort Weyr. Her dragon, Queen Orlith, would soon clutch; spring had made a glorious debut; the Gather at Ruatha Hold was extremely merry; and Moreta was enjoying the attentions of Alessan, the new Lord Holder of Ruatha Hold.

With only eight Turns remaining before the deadly Thread would cease to Fall, all seemed well on Pern.

Then, without warning, a runnerbeast fell ill. Soon myriads of holders, craftsmen, and dragonriders were dying; and the mysterious ailment had spread to all but the most inaccessible holds. Pern was in mortal danger. For, if dragonriders did not rise to char Thread, the parasite would devour any and all organic life it encountered.

The future of the planet rested in the hands of Moreta and the other dedicated, selfless Pern leaders. But of all their problems, the most difficult to overcome was time....