Lincoln's Spies: Their Secret War to Save a Nation (Paperback) | Northshire Bookstore
Skip to main content

Lincoln's Spies: Their Secret War to Save a Nation (Paperback) 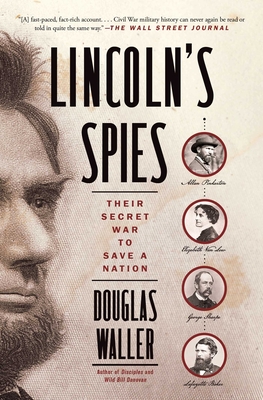 This major addition to the history of the Civil War is a “fast-paced, fact-rich account” (The Wall Street Journal) offering a detailed look at President Abraham Lincoln’s use of clandestine services and the secret battles waged by Union spies and agents to save the nation—filled with espionage, sabotage, and intrigue.

Veteran CIA correspondent Douglas Waller delivers a riveting account of the heroes and misfits who carried out a shadow war of espionage and covert operations behind the Confederate battlefields. Lincoln’s Spies follows four agents from the North—three men and one woman—who informed Lincoln’s generals on the enemy positions for crucial battles and busted up clandestine Rebel networks.

Famed detective Allan Pinkerton mounted a successful covert operation to slip Lincoln through Baltimore before his inauguration after he learns of an assassination attempt from his agents working undercover as Confederate soldiers. But he proved less than competent as General George McClellan’s spymaster, delivering faulty intelligence reports that overestimated Confederate strength.

George Sharpe, an erudite New York lawyer, succeeded Pinkerton as spymaster for the Union’s Army of the Potomac. Sharpe deployed secret agents throughout the South, planted misinformation with Robert E. Lee’s army, and outpaced anything the enemy could field.

Elizabeth Van Lew, a Virginia heiress who hated slavery and disapproved of secession, was one of Sharpe’s most successful agents. She ran a Union spy ring in Richmond out of her mansion with dozens of agents feeding her military and political secrets that she funneled to General Ulysses S. Grant as his army closed in on the Confederate capital. Van Lew became one of the unsung heroes of history.

Lafayette Baker was a handsome Union officer with a controversial past, whose agents clashed with Pinkerton’s operatives. He assembled a retinue of disreputable spies, thieves, and prostitutes to root out traitors in Washington, DC. But he failed at his most important mission: uncovering the threat to Lincoln from John Wilkes Booth and his gang.

Behind these operatives was Abraham Lincoln, one of our greatest presidents, who was an avid consumer of intelligence and a ruthless aficionado of clandestine warfare, willing to take whatever chances necessary to win the war. Lincoln’s Spies is a “meticulous chronicle of all facets of Lincoln’s war effort” (Kirkus Reviews) and an excellent choice for those wanting “a cracking good tale” (Publishers Weekly) of espionage in the Civil War.

Douglas Waller is a former correspondent for Newsweek and Time, where he covered the CIA, Pentagon, State Department, White House, and Congress. He is the author of the bestsellers Wild Bill Donovan, Big Red, and The Commandos, as well as critically acclaimed works such as Disciples, the story of four CIA directors who fought for Donovan in World War II, and A Question of Loyalty, a biography of General Billy Mitchell. He lives in Raleigh, North Carolina.

“Douglas Waller's fast-paced and deeply-researched narrative of Union intelligence operations in the Eastern theater of the Civil War cuts through the myths and fabrications that grew up around "Lincoln's spies" and presents a professional, readable appraisal that emphasizes the positive contributions that Colonel George Sharpe and Richmond Unionist Elizabeth Van Lew made to ultimate Northern victory.  This book is vital reading for anyone interested in the Civil War or in the origins of modern spycraft.”—James M. McPherson, Pulitzer Prize-winning author of Battle Cry of Freedom: The Civil War Era and The War That Forged a Nation