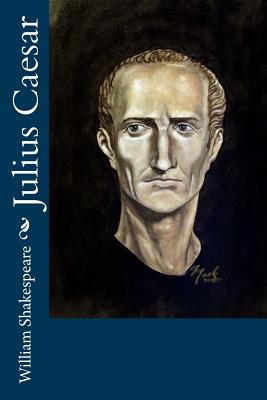 A play of paradoxes, where personal virtue pairs with political naivety; where tyranny's certainties contrast with bloody civil war; where assassination is charged with love for the victim. No one is fully virtuous or evil, and noble aims misfire into the mire of treachery.
Key characters: Brutus, Julius Caesar, Marc Antony — Mike Hare

The Tragedy of Julius Caesar is a tragedy by William Shakespeare, believed to have been written in 1599. It portrays the 44 BC conspiracy against the Roman dictator Julius Caesar, his assassination and the defeat of the conspirators at the Battle of Philippi. It is one of several plays written by Shakespeare based on true events from Roman history, which also include Coriolanus and Antony and Cleopatra. The play opens with two tribunes discovering the commoners of Rome celebrating Julius Caesar's triumphant return from defeating the sons of his military rival, Pompey. The tribunes, insulting the crowd for their change in loyalty from Pompey to Caesar, attempt to end the festivities and break up the commoners, who return the insults. During the feast of Lupercal, Caesar holds a victory parade and a soothsayer warns him to "Beware the ides of March", which he ignores. Meanwhile, Cassius attempts to convince Brutus to join his conspiracy to kill Caesar. Although Brutus, friendly towards Caesar, is hesitant to kill him, he agrees that Caesar may be abusing his power. They then hear from Casca that Mark Antony has offered Caesar the crown of Rome three times and that each time Caesar refused it with increasing reluctance. On the eve of the ides of March, the conspirators meet and reveal that they have forged letters of support from the Roman people to tempt Brutus into joining. Brutus reads the letters and, after much moral debate, decides to join the conspiracy, thinking that Caesar should be killed to prevent him from doing anything against the people of Rome if he were ever to be crowned. After ignoring the soothsayer, as well as his wife Calpurnia's own premonitions, Caesar goes to the Senate. The conspirators approach him with a fake petition pleading on behalf of Metellus Cimber's banished brother. As Caesar predictably rejects the petition, Casca and the others suddenly stab him; Brutus is last. At this point, Caesar utters the famous line "Et tu, Brute?" 2] ("And you, Brutus?", i.e. "You too, Brutus?"), concluding with "Then fall, Caesar " The conspirators make clear that they committed this murder for the good of Rome, not for their own purposes, and do not attempt to flee the scene. Brutus delivers an oration defending his own actions, and for the moment, the crowd is on his side. However, Mark Antony makes a subtle and eloquent speech over Caesar's corpse, beginning with the much-quoted "Friends, Romans, countrymen, lend me your ears " 3] In this way, he deftly turns public opinion against the assassins by manipulating the emotions of the common people, in contrast to the rational tone of Brutus's speech, yet there is method in his rhetorical speech and gestures: he reminds them of the good Caesar had done for Rome, his sympathy with the poor, and his refusal of the crown at the Lupercal, thus questioning Brutus's claim of Caesar's ambition; he shows Caesar's bloody, lifeless body to the crowd to have them shed tears and gain sympathy for their fallen hero; and he reads Caesar's will, in which every Roman citizen would receive 75 drachmas. Antony, even as he states his intentions against it, rouses the mob to drive the conspirators from Rome. Amid the violence, an innocent poet, Cinna, is confused with the conspirator Lucius Cinna and is taken by the mob, which kills him for such "offenses" as his bad verses. Brutus next attacks Cassius for supposedly soiling the noble act of regicide by having accepted bribes. ("Did not great Julius bleed for justice' sake? / What villain touch'd his body, that did stab, / And not for justice?" 4]) The two are reconciled, especially after Brutus reveals that his beloved wife committed suicide under the stress of his absence from Rome; they prepare for a civil war against Mark Antony and Caesar's adopted son, Octavius, who have formed a triumvirate in Rome with Lepidus. That night, Caesar's ghost appears to Brutus with a warning of defeat.

William Shakespeare (26 April 1564- 23 April 1616) was an English poet, playwright and actor, widely regarded as the greatest writer in the English language and the world's pre-eminent dramatist. He is often called England's national poet and the "Bard of Avon"