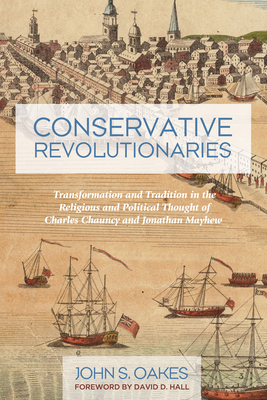 Boston Congregationalist ministers Charles Chauncy (1705-87) and Jonathan Mayhew (1720-66) were significant political as well as religious leaders in colonial and revolutionary New England. Scholars have often stressed their influence on major shifts in New England theology, from traditional Calvinism to Arminianism and, ultimately, to universalism and Unitarianism. They have also portrayed Mayhew as an influential preacher, whose works helped shape American revolutionary ideology, and Chauncy as an active leader of the patriot cause. Through a deeply contextualized re-examination of the two ministers as ""men of their times,"" John S. Oakes offers a fresh, comparative interpretation of how their religious and political views changed and interacted over decades. The result is a thoroughly revised reading of Chauncy's and Mayhew's most innovative ideas. Conservative Revolutionaries also unearths strongly traditionalist elements in their belief systems, centering on their shared commitment to a dissenting worldview based on the ideals of their Protestant New England and British heritage. Oakes concludes with a provocative exploration of how the shifting theological and political positions of these two ""conservative revolutionaries"" may have helped redefine prevailing notions of human identity, capability, and destiny. ""In studies of early American evangelicals and evangelicalism that seem to dominate the landscape these days, Charles Chauncy is usually trotted out in a couple of paragraphs to represent the reactionary 'Old Lights' who were so shortsighted as to oppose the Great Awakening, and Jonathan Mayhew is mentioned in passing as an inlet of soulless rationalism on the road to Deism. But John Oakes' dual biography of these two rich and formative figures shows that these characterizations are too pat, too simplistic, and that a new, comparative approach to their religious and political thought reveals that 'traditional Calvinists' such as Chauncy and Mayhew are vital to understanding the great changes that occurred in the period from the Awakenings to the Revolution. In the process, Oakes shows that both of these figures had many points of similarity but were also unique thinkers and actors in their own right."" -- Kenneth P. Minkema, Jonathan Edwards Center, Yale University ""A balanced, careful, and engaging study of two important figures who are more often captured in caricature. Oakes' book situates Charles Chauncy and Jonathan Mayhew not as pathfinders of revolution and Enlightenment, but as key figures in their own historical moment."" --Nicholas Guyatt, University of Cambridge ""Oakes' study of Chauncy and Mayhew has brought depth, texture, and a kind of iridescence to his subjects. For those who think 'moderate' means 'bland, ' this book offers a powerful rebuttal. Far from monochromatic gray, Chauncy's and Mayhew's efforts to balance tradition and change drew from a rich palette of intellectual trends and cultural forces in eighteenth-century New England. Oakes' comparison of them vividly reveals, too, that such colonial balancing acts took multiple forms."" --David Holland, Associate Professor of North American Religious History, Harvard Divinity School ""John Oakes' erudite understanding of Reformed Protestantism has allowed him to give us a fresh, insightful, and nuanced analysis of how Charles Chauncy and Jonathan Mayhew articulated the momentous religious and political transformations that shook New England from the 1740s through the Revolution. By locating these two important figures in the socioreligious context in which they flourished, Oakes has framed a revealing window that sheds light on the way in which religiously based thought, as it evolved in New England, suffused the secular languages of liberty, and how tradition continued to shape the innovative discourses of the latter half of the eighteenth century. An exemplar of how disciplined comparative scholarship can significantly expand our.

John Oakes is an adjunct professor in the department of history at Simon Fraser University. He recently held a Postdoctoral Fellowship at Harvard Divinity School and a Visiting Fellowship at Yale Divinity School. He has also taught courses in church history and spiritual theology at Regent College, Vancouver. He was educated at Oxford University (MA), Regent College (MDiv and MCS), the University of British Columbia (MA), and Simon Fraser University, where he earned his PhD in history.