Tea with the Black Dragon (Paperback) 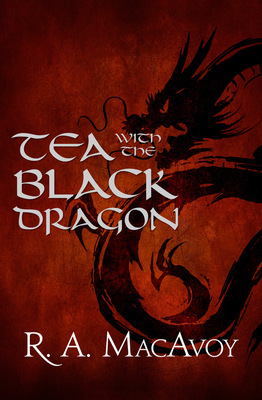 This is book number 1 in the Black Dragon series.

Originally written in 1983, this book was twenty or thirty years ahead of its time, with a great female protagonist who drives the story and a healthy dose of Chinese mysticism. That makes it maybe ten years behind where we are now, where some elements are handled in a way that you don't quite wince at, but you certainly notice. Still, it's aged better than many of its contemporaries, and is a quicker read that you can often find today. I particularly enjoyed the elegant and eloquent manner of speech between the two main characters, helping to elevate it to a loftier level of enjoyment. — Andrew Bugenis

In this "astonishing fantasy debut," a mother and a mysterious Chinese man--who is more than he appears--search for her missing daughter in San Francisco (Locus). Offering "a deft blend of the oldest of magicks in a dragon, and the newest of sorceries in computers" (Anne McCaffrey), this is the incomparable novel that garnered Nebula, Hugo, World Fantasy, and Philip K. Dick Award nominations, and earned its author the John W. Campbell Best New Writer award. Martha Macnamara knows that her daughter, Elizabeth, is in trouble--she just doesn't know what kind. Mysterious phone calls from San Francisco at odd hours of the night are the only contact they've had for years. Now, Elizabeth has sent her mother a plane ticket and reserved a room for her at the city's most luxurious hotel. Yet, since Martha checked in, she still hasn't been contacted by her daughter, and is feeling lonely, confused, and a little bit worried. But Martha meets someone else at the hotel: Mayland Long, a distinguished-looking and wealthy Chinese man who is drawn to Martha's good character and ability to pinpoint the truth of a matter. They become close quickly, and he promises to help her find Elizabeth. Before he can solve the mystery, though, Martha herself disappears--and Mayland realizes that he's in love with her. Now, a man whose true nature and identity is unknown to those around him will embark on a potentially dangerous adventure in a city on the verge of exploding with its own sort of magic as technology spreads through the region that will become known as Silicon Valley. An elegant, delightful, and unusual novel that blends ancient myth with modern wizardry, Tea with the Black Dragon is "a small masterpiece, setting a fantasy story against a contemporary background" (Booklist).

R. A. MacAvoy is a highly acclaimed author of imaginative and original science fiction and fantasy novels. Her debut novel, Tea with the Black Dragon, won the John W. Campbell Award for Best New Writer. She has also written the Damiano trilogy, the chronicles of a wizard's young son, set during an alternate history version of the Italian Renaissance; as well as The Book of Kells and Twisting the Rope, the highly acclaimed sequel to Tea with the Black Dragon. MacAvoy is also the author of the beloved and much-praised Lens of the World trilogy.