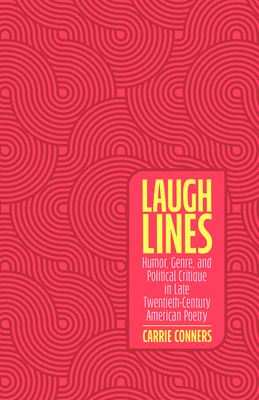 Humor in recent American poetry has been largely dismissed or ignored by scholars, due in part to a staid reverence for the lyric. Laugh Lines: Humor, Genre, and Political Critique in Late Twentieth-Century American Poetry argues that humor is not a superficial feature of a small subset, but instead an integral feature in a great deal of American poetry written since the 1950s. Rather than viewing poetry as a lofty, serious genre, Carrie Conners asks readers to consider poetry alongside another art form that has burgeoned in America since the 1950s: stand-up comedy. Both art forms use wit and laughter to rethink the world and the words used to describe it. Humor's disruptive nature makes it especially whetted for critique. Many comedians and humorous poets prove to be astute cultural critics. To that end, Laugh Lines focuses on poetry that wields humor to espouse sociopolitical critique. To show the range of recent American poetry that uses humor to articulate sociopolitical critique, Conners highlights the work of poets working in four distinct poetic genres: traditional, received forms, such as the sonnet; the epic; procedural poetry; and prose poetry. Marilyn Hacker, Harryette Mullen, Ed Dorn, and Russell Edson provide the main focus of the chapters, but each chapter compares those poets to others writing humorous political verse in the same genre, including Terrance Hayes and Anne Carson. This comparison highlights the pervasiveness of this trend in recent American poetry and reveals the particular ways the poets use conventions of genre to generate and even amplify their humor. Conners argues that the interplay between humor and genre creates special opportunities for political critique, as poetic forms and styles can invoke the very social constructs that the poets deride.

Carrie Conners is professor of English at LaGuardia Community College-CUNY. Her debut poetry collection, Luscious Struggle, was selected as a 2020 Paterson Poetry Prize Finalist, and her second poetry collection, Species of Least Concern, was named a finalist of the 2021 Main Street Rag Book Award. Her essays and poems have appeared in the Journal of Working-Class Studies, Bodega, Kestrel, Quiddity, RHINO, and Chautauqua, among other publications