Instruments of Empire: Filipino Musicians, Black Soldiers, and Military Band Music During Us Colonization of the Philippines (Hardcover) 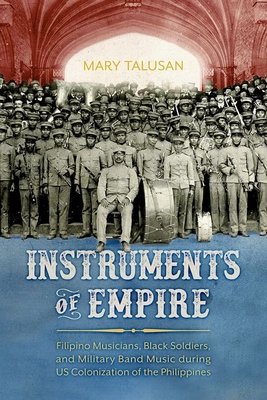 At the turn of the twentieth century, the United States extended its empire into the Philippines while subjugating Black Americans in the Jim Crow South. And yet, one of the most popular musical acts was a band of "little brown men," Filipino musicians led by an African American conductor playing European and American music. The Philippine Constabulary Band and Lt. Walter H. Loving entertained thousands in concert halls and world's fairs, held a place of honor in William Howard Taft's presidential parade, and garnered praise by bandmaster John Philip Sousa--all the while facing beliefs and policies that Filipinos and African Americans were "uncivilized." Author Mary Talusan draws on hundreds of newspaper accounts and exclusive interviews with band members and their descendants to compose the story from the band's own voices. She sounds out the meanings of Americans' responses to the band and identifies a desire to mitigate racial and cultural anxieties during an era of overseas expansion and increasing immigration of nonwhites, and the growing "threat" of ragtime with its roots in Black culture. The spectacle of the band, its performance and promotion, emphasized a racial stereotype of Filipinos as "natural musicians" and the beneficiaries of benevolent assimilation and colonial tutelage. Unable to fit Loving's leadership of the band into this narrative, newspapers dodged and erased his identity as a Black American officer. The untold story of the Philippine Constabulary Band offers a unique opportunity to examine the limits and porousness of America's racial ideologies, exploring musical pleasure at the intersection of Euro-American cultural hegemony, racialization, and US colonization of the Philippines.

Mary Talusan is assistant professor of Asian-Pacific studies at California State University, Dominguez Hills. She is coeditor of Our Culture Resounds, Our Future Reveals: A Legacy of Filipino American Performing Arts in California and performs with the Pakaraguian Kulintang Ensemble.