The Weight of the Heart (Paperback) 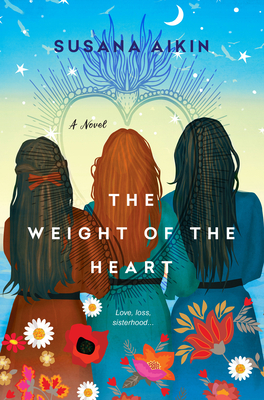 Set in contemporary Spain, Susana Aikin’s latest novel is a colorful, beautifully written examination of memory, romance, and the intricacies of family duty.

On a sweltering August day in Madrid, Anna, Julia, and Marion return to their childhood home. The once grand mansion, furnished with exotic objects and art that reflected the cultures of their English father and Spanish mother, once bustled with visitors. But since their father’s death, all three sisters have been reluctant to go back, still feeling the weight of his domineering influence. Julia believes that before the house can sell, it needs to be cleared of negative energy, and she has planned a limpieza, or cleaning ritual.

Marion, the oldest, fears what the ceremony might unleash. Anna, the youngest and most capable and ambitious of the trio, is skeptical of the Cuban santera hired by Julia. Still, she is wary of antagonizing her siblings, or of stirring up old resentment.

But as the ceremony progresses, guilt and recrimination become impossible to ignore. And if there’s a chance of bringing their house and their lives out of the shadows, it rests in the sisterhood, strength, and indomitable love that remains when the ghosts of the past surrender at last.

Praise for Susana Aikin’s We Shall See the Sky Sparkling

“Satisfying. . . . Expertly plotted and rife with historical details . . . a rich story of the prejudices women faced at the turn of the 20th century.”
—Publishers Weekly

Born in Spain of an English father and a Spanish mother, Susana Aikin is a writer and a filmmaker who has lived and worked in New York City since 1982. She was educated in both England and Spain; studied law at the University of Madrid, and later Creative Writing at Manchester Metropolitan University, UK. In 1986 she started her own independent film production company, Starfish Productions, producing and directing documentary films that won her multiple awards, including an American Film Institute grant, a Rockefeller Fellowship, and an Emmy Award in 1997. She started writing fiction full time in 2010. She has two sons and now lives between Brooklyn and the mountains north of Madrid.