The J. B. Collins Collection: The Third Target / The First Hostage / Without Warning (Mass Market Paperbound) 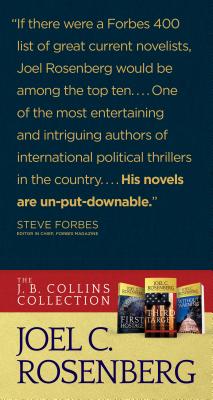 By Joel C. Rosenberg
Call or email to see if a used copy is available.
Out of Print

The Third Target
When New York Times foreign correspondent J. B. Collins hears rumors that an al-Qaeda splinter cell--ISIS--has captured a cache of chemical weapons inside Syria, he knows this is a story he must pursue at all costs. With terrorist forces trying to bring down two Arab governments and the U.S. president about to make a trip to the region, can Collins uncover the terrorists' plot before it's too late?

The First Hostage
"The president of the United States . . . is missing." With these words, New York Times journalist J. B. Collins puts the entire world on high alert. The leaders of Israel and Palestine are critically injured, Jordan's king is fighting for his life, and the U.S. president is missing and presumed captured. Working with the Secret Service, Collins must locate and rescue the leader of the free world before ISIS's threats become a catastrophic reality.

Without Warning
As he prepares to deliver the State of the Union address, the president of the United States is convinced ISIS is on the run. But with the Middle East on fire, the Israeli prime minister dead, and Amman in ruins, journalist J. B. Collins fears a catastrophic attack inside the American homeland is imminent. He argues that only an all-out manhunt to capture or kill the leader of ISIS can stop the attack and save America before it's too late.