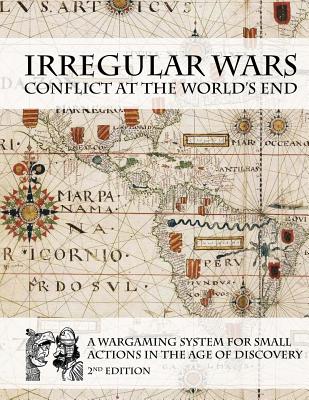 Irregular Wars: Conflict at the World's End provides a fun and easy, fast-play, set of rules for engagements on the fringe of the European world - Ireland, the Americas, the East Indies and the vast steppes of Central Asia. The lands discovered by European explorers seeking easy access to the trading wealth of the Indies exposed untold avenues for expansion. The sixteenth and seventeenth centuries saw successive waves of self-aggrandising traders, raiders, conquerors and colonists leave Europe for new lands beyond the sea. Some pursued the freedom to practice persecuted religions or the opportunity to convert the heathens, others sought raw resources in the form of gold, furs or exotic spices or plants, like nutmeg or tobacco. The game is designed for engagements between two forces of from 500 to 2,500 fighting men per side. Each player represents a leading conquistador, noble, governor, daimyo, chief, cacique or petty monarch. These leaders are given the umbrella title of 'lords'. The key to success in Irregular Wars is the lord's ability to harness the enthusiasm of volunteer or militia soldiers which, together with the effective use of terrain, counts for more than sheer numbers alone.The uncertain nature of army recruitment and variable level of centralised command and control make the rules ideal for small scale, localised and asymmetrical warfare. The game could quite easily be expanded to cover earlier or later conflicts anywhere in the world prior to the establishment of reliable and professional armies. This second edition of Irregular Wars continues the fun and fast approach of the original rules. More background information and explanations are provided and the phase sequence has been streamlined. Additional changes throughout the rules make the randomised aspects of the game more realistic... in a random sort of way.This edition includes army lists for 48 different sixteenth and seventeenth century armies belonging to the major European colonial powers and the indigenous populations of Ireland, the Americas, East Indies and Eurasian Steppe.