The Wreck of the Portland: A Doomed Ship, a Violent Storm, and New England's Worst Maritime Disaster (Paperback) 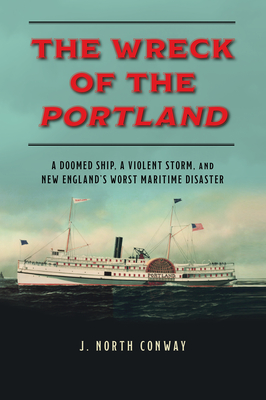 The SS Portland was a solid and luxurious ship, and its loss in 1898 in a violent storm with some 200 people aboard was later remembered as "New England's Titanic." The Portland was one of New England's largest and most luxurious paddle steamers, and after nine years' solid performance, she had earned a reputation as a safe and dependable vessel. In November 1898, a perfect storm formed off the New England coast. Conditions would produce a blizzard with 100 miles per hour winds and 60-foot waves that pummeled the coast. At the time there was no radio communication between ships and shore, no sonar to navigate by, and no vastly sophisticated weather forecasting capacity. The luxurious SS Portland, a sidewheel steamer furnished with chandeliers, red velvet carpets and fine china, was carrying more than 200 passengers from Boston to Portland, Maine, over Thanksgiving weekend when it ran headlong into a monstrous, violent gale off Cade Cod. It was never seen again. All passengers and crew were lost at sea. More than half the crew on board were African Americans from Portland. Their deaths decimated the Maine African American community. Before the storm abated it became one of the worst ever recorded in New England waters. The storm, now known as "The Portland Gale," killed 400 people along the coast and sent more than 200 ships to the bottom, including the doomed Portland. To this day it is not known exactly how many passengers were aboard or even who many of them were. The only passenger list was aboard the vessel. As a result of this tragedy, ships would thereafter leave a passenger manifest ashore. The disaster has been blamed on the hubris of the captain of the Portland, Hollis Blanchard, who decided to leave the safety of Boston Harbor despite knowing that a severe storm was hurtling up the coast. Blanchard, a long-time mariner, had been passed over for a promotion for a younger captain. He decided he wanted to show the steamship company that they had made a mistake by getting the Portland safely into port ahead of the imminent storm. Author J. North Conway has created here a personal, visceral account of the sinking and the times and the people involved, with stories to bring readers onto the Portland that day: Here is Eben Heuston, the chief steward onboard the ill-fated ship. More than half of the crew of the ship were African Americans. Hueston was an African American who lived in the Portland community of Munjoy Hill and was a member of the Abyssinian Church. After the sinking of the Portland the African American community disappeared and the church closed. And Emily Cobb a nineteen year old singer from Portland's First Parish Church who was scheduled to give her first recital at the church on that Sunday. And Hope Thomas who came to Boston to shop for Christmas and because she decided to exchange some shoes she purchased missed taking the ill-fated Portland. Because of the lack of communications from Maine to Cape Cod, it was days before anyone was able to get word about the fate of the ship or survivors. Author J. North Conway has painstakingly recreated the events, using first-hand sources and testimonies to weave a dramatic, can't-put-it down narrative in the tradition of Erik Larson's Isaac's Storm and Walter Lord's enduring classic, A Night to Remember. He brings the tragedy to life with contemporaneous accounts the Coast Guard, from Boston newspapers such as the Globe, Herald, and Journal, and from The New York Times and the Brooklyn Daily Eagle.

J. North Conway is the author of more than a dozen nonfiction books. His most recent book New England Rocks, published by Arcadia Publishing in 2017, examines the history, lore, legends and people associated with forty-five notable New England geological wonders. He is also the author a trilogy on New York City during the Gilded Age, published by the Globe Pequot/Lyons Press. It includes the hardcover, paperback and kindle editions of, King of Heists (2009), hailed by Readers' Digest as one of the best books of summer 2009; The Big Policeman (2010), acclaimed by the Wall Street Journal as, "This, surely, is what makes Thomas Byrnes truly interesting..."; and Bag of Bones (2012). He is also the author of Queen of Thieves, published in 2014 by Skyhorse.