It Happened in New Hampshire: Stories of Events and People That Shaped Granite State History (Paperback) 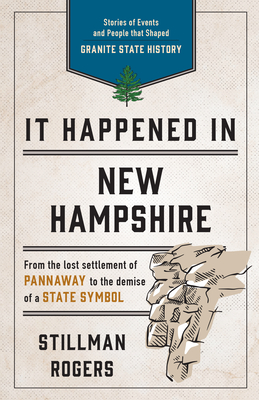 By Stillman Rogers
$16.95
Click Title for IN STOCK Location

From a bizarre French and Indian War battle to the state's first impeachment trial, It Happened in New Hampshire looks at intriguing people and episodes from the history of the Granite State. -Relive the humorous, not-so-adventurous "camping" trip by a group of America's most famous industrial titans in 1919, whose necessities included a personal chef and an electric generator. -Find out how one woman's kind act toward a young Native American years later spared her and her children from certain death during a ruthless revenge attack on settlers in a Dover garrison. -Learn how concern to protect the White Mountains from environmental degradation contributed to the establishment of national forests across the United States. -Discover how a fearless force of thirty soldiers refused surrender and sucessfully held off an army of 700 French militia and Indian allies at a remote outpost. -Read about how two colonial governors--who, coincidentally, were close relatives--shocked their citizens with nearly equally scandalous, completely unexpected marriages.

Stillman Rogers is a New Hampshire native who has written professionally for more than 30 years. He writes travel columns for newspapers and magazines and also writes a travel blog at https: //bestgetaways.wordpress.com. Stillman is the author of several books about New England, including New Hampshire Off the Beaten Path, a guide to the places only the natives know about. Some of his greatest pleasures are found while traveling the more quiet roads and trails of New Hampshire and New England and finding not only lost or seldom seen places but their history as well. He has written extensively about Eastern Canada, New England, Europea and other destinations. A co-author of Adventure Guide to Canada's Atlantic Provinces with Barbara Radcliffe Rogers, he and his co-author were the 2010 winners of the Travel Industry of Canada's Toronto Star Award for Excellence in Media and of the New Hampshire Travel Council Media Award for 2011. His photography has appeared in many national and international publications and monthly in New Hampshire Magazine. With his co-author he also has written numerous travel guides to Portugal, Northern Italy, and other European destinations for European and North American publishers, and his photography is extensively used to illustrate their work. He currently lives in southwestern New Hampshire, where he enjoys travel, gardening, kayaking, and skiing.