Inside the Star Wars Empire: A Memoir (Hardcover) 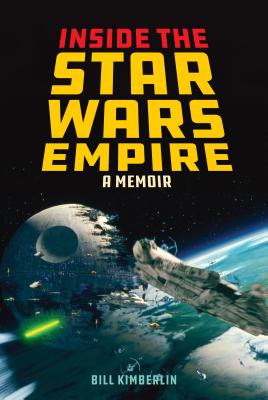 I have read many, many books about Star Wars over the years. This is, I believe, one of the first memoirs written by someone who worked in the trenches of George Lucas' Industrial Light and Magic, ILM.
Kimberlin weaves personal anecdotes from throughout his life in with behind the scenes tales of film making, life on Lucas Ranch, and other sorts of gossip not often found in official Star Wars publications.
As an employee of ILM, the author not only took part in crafting that galaxy far, far away (including the epic shot from Return of the Jedi seen on the cover) but Kimberlin also worked on Jurassic Park, Schindler's List, Back to the Future, and so many more beloved movies.
This is a quick read, easy to digest in short spurts, and bring a real human eye to the sometimes incredible mythology of Lucasfilm, Spielberg, Star Wars, etc. that has been built up over the years.

Bill Kimberlin may refer to himself as "one of those names on the endless list of credits at the close of blockbuster movies." In reality though, he's a true insider on some of the most celebrated and popular movies and franchises of the past century. Jurassic Park. Star Trek. Jumanji. Schindler's List. Saving Private Ryan. Even Forrest Gump. And perhaps most notably, Star Wars. Inside the Star Wars Empire is the very funny and insightful tell-all about the two decades Kimberlin spent as a department director at LucasFilm Industrial Light and Magic (ILM), the special effects studio founded by the legendary filmmaker George Lucas.

Bill Kimberlin has worked on dozens of films (http: //www.imdb.com/name/nm0453863/?ref_=fn_al_nm_1) and is sought after as a lecturer and speaker on the subject of special effects. He is the director of the film American Nitro (the film that nabbed him a coveted spot in Lucas' studio), which has a strong cult following, including close to 800,000 followers on Facebook. Inside the Star Wars Empire is his first book.