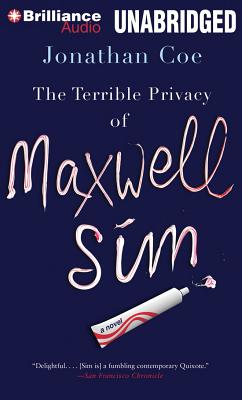 Maxwell Sim is out of work, newly divorced, and clinically depressed. He has just returned from Australia where he failed to renew any sort of bond between himself and his distant and estranged father. How then can this book be so funny? Of course, it's a dark sort of humor but Jonathan Coe has crafted a brilliant tragic-comic tale with a hero who can't help but make a mess of his life. Despondent upon his return from Australia, he lucks into a job selling environmentally- friendly toothbrushes. His first assignment involves a road trip from London to the distant Shetland Islands. It is on this trip that Max's life truly begins to unravel. At each stop along the way, whether visiting friends or his ex-wife and daughter, Max learns something about his past or his identity that pushes him closer to the brink madness. The only person he can really talk to is the calming female voice of the navigation system in his company's Prius. While the laughs came less frequently the fart! her north Max journeyed, I could not wait to find out what the next stop would reveal, where Max's mind would wander and, of course, where he would end up. An absolutely fantastic novel. — Stan Hynds

Maxwell Sim can't seem to make a single meaningful connection. He maintains an e-mail correspondence with his estranged wife, though under a false identity; his incomprehensible teenage daughter prefers her BlackBerry to his conversation; and his childhood best friend refuses to return his calls. In an attempt to get out of this horrible rut, Max quits his job at the local department store and accepts a strange business proposition that has him driving a Prius full of toothbrushes from London to the remote Shetland Islands. But Max's trip doesn't go as planned, as he's unable to resist making a series of impromptu visits to important figures from his past.

A modern-day picaresque from Jonathan Coe--acclaimed author of The Rotters' Club--The Terrible Privacy of Maxwell Sim explores the difficulties of making genuine connections in a world of advanced communications technology and rampant social networking.