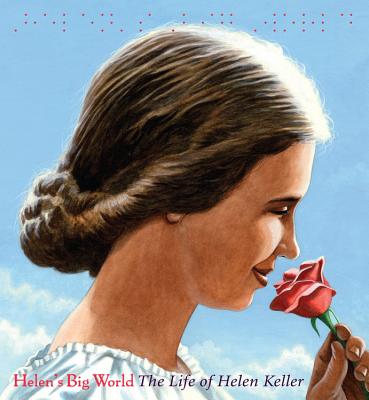 This is book number 4 in the A Big Words Book series.

This brilliant portrait of Helen Keller, laced with stirring quotes and magnificent illustrations, shows that the desire to learn knows no boundaries. An inspiring story about taking full advantage of every opportunity one has and showing the vastness of knowledge that is available if one has the desire.

This picturebook biography is an excellent and accessible introduction for young readers to learn about one of the world's most influential luminaries. With her signature style, weaving engrossing prose with stirring quotations from Helen Keller herself, Doreen Rappaport brings a poignant narrative to life. Acclaimed illustrator Matt Tavares beautifully captures the dynamism and verve of Helen Keller's life and legacy, making Helen's Big World an unforgettable portrait of a woman whose vision for innovation and progress changed America-and the world-forever.
Praise for Helen's Big World:
* "Stirring and awe-inspiring."
-The Horn Book, starred review
"Helen Keller's transcendent leap across the barriers of her blindness and deafness continues to inspire."
-Kirkus Reviews

Abe's Honest Words
* "Exceptional art, along with Rappaport's and Lincoln's words, makes this a fine celebration of a man who needs little introduction."
-Booklist, starred review
Jack's Path of Courage
"An evenhanded, graphically stirring biography."
-Publishers Weekly
Eleanor, Quiet No More
* "Once again Rappaport celebrates a noble, heroic life in powerful, succinct prose, with prominent, well-chosen, and judiciously placed quotes that both instruct and inspire...Celebrate women in history and in politics with this picture-book life."
-School Library Journal, starred review

* "Concisely written and yet poetic, this is a first purchase for every library."
-School Library Journal, starred review

Doreen Rappaport's nonfiction and historical fiction books have been acclaimed for their meticulous research and varied literary styles. She is the recipient of the Washington Post-Children's Book Guild lifetime achievement award for the writing of nonfiction. Among her many award-winning biographies are Martin's Big Words: The Life of Dr. Martin Luther King, Jr., illustrated by Bryan Collier, a Caldecott Honor Book, Coretta Scott King Honor Book, Orbis Pictus Honor Book, and a Jane Addams Children's Book Award winner; Abe's Honest Words: The Life of Abraham Lincoln, illustrated by Kadir Nelson, a CCBC Best Book of the Year and an IRA Teacher's Choice; and Jack's Path of Courage: The Life of John F. Kennedy, illustrated by Matt Tavares. She lives and writes in upstate New York. Visit her at www.doreenrappaport.com.

Matt Tavares (www.matttavares.com) is the illustrator of several books, including 'Twas the Night Before Christmas, Jack and the Beanstalk, written by E. Nesbit, The Gingerbread Pirates, written by Kristin Kladstrup, and Jack's Path of Courage: The Life of John F. Kennedy, written by Doreen Rappaport. His books have won several awards, including four Parents' Choice Gold Awards, a Parents' Choice Silver Honor, six Oppenheim Gold Seal Awards, and an Orbis Pictus Honor. His illustrations have been exhibited at the Museum of American Illustration at the Society of Illustrators, and at the Brandywine River Museum. Matt lives in Maine with his wife and two daughters.

"Helen Keller's transcendent leap across the barriers of her blindness and deafness continues to inspire."
—Kirkus Reviews

* "While there are many books available about Helen Keller for this age group, this title offers a unique and beautiful perspective on her life."
—School Library Journal, starred review