10% Happier: How I Tamed the Voice in My Head, Reduced Stress Without Losing My Edge, and Found a Self-Help That Actually Works--A (Compact Disc) 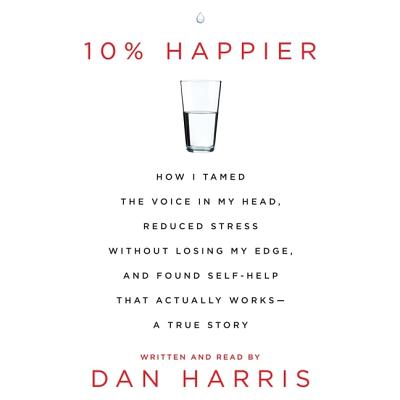 A hilarious, accessible view of stress in our modern world and the benefits of practicing the ancient tradition of meditation. A funny, part memoir, part self-help book that is meant to demystify our perceptions of meditation and inspire us to give it a try. — Fran Tobia

As a professional eye-roller, things like meditation, psychoanalysis, and most other quasi-spiritual endeavors are beyond me. Dan Harris felt the same way.
After experiencing a very public anxiety attack, he sought ways to "tame the voice in his head" and just generally learn how to appreciate life. Run-ins with TV gurus such as Eckhart Tolle and Deepak Chopra brought equal parts revelation and frustration for the author, who sought a more "real world" approach to being a happier person.
Part memoir, part intro-to-Buddhism and other Eastern philosophies, Harris breaks down the mumbo-jumbo and gets real about how he's come to face his anxiety head-on and be 10% Happier in the process. — Chris Linendoll

Nightline anchor Dan Harris embarks on an unexpected, hilarious, and deeply skeptical odyssey through the strange worlds of spirituality and self-help, and discovers a way to get happier that is truly achievable.

After having a nationally televised panic attack on Good Morning America, Dan Harris knew he had to make some changes. A lifelong nonbeliever, he found himself on a bizarre adventure, involving a disgraced pastor, a mysterious self-help guru, and a gaggle of brain scientists. Eventually, Harris realized that the source of his problems was the very thing he always thought was his greatest asset: the incessant, insatiable voice in his head, which had both propelled him through the ranks of a hyper-competitive business and also led him to make the profoundly stupid decisions that provoked his on-air freak-out.

We all have a voice in our head. It's what has us losing our temper unnecessarily, checking our email compulsively, eating when we're not hungry, and fixating on the past and the future at the expense of the present. Most of us would assume we're stuck with this voice - that there's nothing we can do to rein it in - but Harris stumbled upon an effective way to do just that. It's a far cry from the miracle cures peddled by the self-help swamis he met; instead, it's something he always assumed to be either impossible or useless: meditation. After learning about research that suggests meditation can do everything from lower your blood pressure to essentially rewire your brain, Harris took a deep dive into the underreported world of CEOs, scientists, and even marines who are now using it for increased calm, focus, and happiness.

10% Happier takes readers on a ride from the outer reaches of neuroscience to the inner sanctum of network news to the bizarre fringes of America's spiritual scene, and leaves them with a takeaway that could actually change their lives.