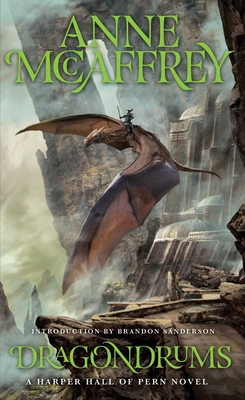 This is book number 3 in the Harper Hall of Pern series.

As Menolly uncovers intrigue, Piemur discovers the rhythm of adventure in the third book in the Harper Hall trilogy, set within science fiction legend Anne McCaffrey’s beloved and bestselling Dragonriders of Pern series.

As Menolly navigates her way as the first journeywoman Harper in the history of Pern, fellow student Piemur is asked to leave Harper Hall. Secretly, Piemur is drafted by Masterharper Robinton to become a dragonrider—and he will soon embark on a dangerous mission to the Southern Hold.

Anne Inez McCaffrey (1926–2011) was an American-born Irish writer, best known for the Dragonriders of Pern science fiction series. Early in McCaffrey’s forty-six-year career as a writer, she became the first woman to win a Hugo Award for fiction and the first to win a Nebula Award. Her 1978 novel The White Dragon became one of the first science fiction books to appear on the New York Times bestseller list. In 1999, she was the recipient of the Margaret A. Edwards Award, honoring her lifetime contribution to writing for teens. In 2005 the Science Fiction and Fantasy Writers of America named McCaffrey its twenty-second Grand Master, an annual award to living writers of fantasy and science fiction. She was inducted into the Science Fiction Hall of Fame in 2006.