When Can We Go Back to America?: Voices of Japanese American Incarceration during WWII (Paperback) 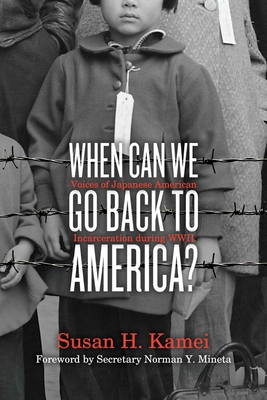 Four starred reviews!
A Kirkus Reviews Best YA Nonfiction of 2021

In this “riveting and indispensable” (Kirkus Reviews, starred review) narrative history of Japanese Americans before, during, and after their World War II incarceration, Susan H. Kamei weaves together the voices of over 130 individuals who lived through this tragic episode, most of them as young adults.

It’s difficult to believe it happened here, in the Land of the Free: After the bombing of Pearl Harbor in 1941, the United States government forcibly removed more than 120,000 persons of Japanese ancestry from the Pacific Coast and imprisoned them in desolate detention camps until the end of World War II just because of their race.

In what Secretary Norman Y. Mineta describes as a “landmark book,” he and others who lived through this harrowing experience tell the story of their incarceration and the long-term impact of this dark period in American history. For the first time, why and how these tragic events took place are interwoven with more than 130 individual voices of those who were unconstitutionally incarcerated, many of them children and young adults.

Now more than ever, their words will resonate with readers who are confronting questions about racial identity, immigration, and citizenship, and what it means to be an American.

Susan H. Kamei received her JD from the Georgetown University Law Center. She teaches at the University of Southern California on the legal ramifications of the incarceration of persons of Japanese ancestry during World War II and how they apply to constitutional issues, civil liberties, and national security considerations today.

Norman Y. Mineta and his family spent the years during World War II incarcerated at the Santa Anita Assembly Center and the Heart Mountain Relocation Center. He served the city of San Jose, California, from 1967 to 1974 as a city council member and as its mayor, and went on to represent California’s Thirteenth Congressional District in the US House of Representatives from 1974 to 1995. As a member of Congress, Mineta served as chairman of the US House Committee on Public Works and Transportation from 1992 to 1994 and chaired the subcommittees on aviation and surface transportation. In 2000, President Bill Clinton appointed Mineta as US Secretary of Commerce, making him the first Asian American to become a member of a presidential cabinet. In 2001, President George W. Bush appointed him as US Secretary of Transportation, where he served until 2006. The numerous awards he has received in recognition of his leadership include the Presidential Medal of Freedom—the highest civilian honor in the United States—and the Wright Brothers Memorial Trophy, awarded for significant public service of enduring value to aviation in the United States. His many civic roles include serving as the chairman of the board of trustees of the Japanese American National Museum.

These stories, drawn mostly from works in the public domain, are presented in this volume that covers the bombing of Pearl Harbor through to the redress movement, the 1983 congressional commission findings, and former President Donald Trump’s 2017 executive orders restricting travel from many predominantly Muslim countries. The author provides a framework for understanding the lead-up to the decision to intern so-called enemy aliens, along with about 72,000 American citizens of Japanese descent. From there, she shares their harrowing journey to barren desert camps, the harsh realities of life behind barbed-wire fences, and their eventual release during a time when anti-Japanese sentiments still ran high. The use of direct quotes from internees—many of them children and young adults—adds remarkable emotional weight. Many lives were ruined as people’s dreams and life goals were crushed, and readers will viscerally connect with their endurance and marvel at how many still maintained faith in the democratic system. The message of awareness of this past injustice and its connection to standing in solidarity with others who face injustice is a compelling theme of this riveting and indispensable work.

As a US History teacher, I consider When Can We Go Back to America? to be a valuable teaching reference. Packed full of diverse incarceree perspectives, it includes useful features such as primary source excerpts, a time line, a glossary, and explanations of incarceration geography. Kamei’s strength as a legal scholar comes through in making the historical context and legal significance of key court cases accessible to high school students. The work motivates us to apply the lessons learned to current events and inspires us to consider ways we could act in allyship with other communities.
— Russell Spinney

In When Can We Go Back to America?, Susan Kamei relates the whole range of Japanese American experiences during World War II—from the camps to the courtrooms, from the soldiers of the segregated 442nd Regimental Combat Team to the draft resisters—restoring a much-needed sense of agency to people who triumphed over prejudice during a period of nationwide fear. At a time when Asian Americans face new threats in their own homeland, When Can We Go Back to America? is a bracing reminder of the challenges facing minorities—and their hard-earned successes.
— Robert Asahina

When Can We Go Back to America? is spell-binding tour de force that illuminates the heart-wrenching reality of lives forever changed by a national atrocity of inhumane proportions. In drawing upon first-hand accounts of those incarcerated, Kamei has created a moving record that shows the consequences of unchecked political power. For those examining the case for reparations for Black American descendants of slavery in the United States, some events are frighteningly familiar—denying a disfavored group the right to own property or vote, rounding up innocent unsuspecting people at gunpoint and rendering them homeless, and confiscating and appropriating their property. The hitherto untold stories of confusion, disbelief, frustration, anger, protest, and resolve provide a legacy of inspiration for current and future generations. They also serve as a warning of what can happen when racism and hysteria drive our nation’s thinking instead of justice.
— A. Kirsten Mullen and William A. Darity Jr.

The incarceration of 120,000 persons of Japanese ancestry is often characterized as a tragic “mistake” arising from wartime hysteria. Susan Kamei’s absorbing page-turner reveals that what happened was no mistake—the reasons asserted to justify forcing these Americans at gunpoint into concentration camps were entirely made up—and the government knew it at the time. She deftly synthesizes crisp historical narrative with powerful first-person accounts to illustrate the perils to democracy when “alternative facts” hold sway over the real ones. Despite being unjustly targeted, the voices of incarcerated Japanese Americans show their unwavering faith in America, and their stories provide important lessons for our country’s present and its future.
— Donald K. Tamaki

When Can We Go Back to America? provides readers with an immersive look at the experience of Japanese incarceration during World War II. Teeming with first-hand accounts of both the experience in the camps and the fight over what incarceration did and should mean to the American nation as a whole, Susan Kamei's book is an invaluable resource for any related history course. In addition, thanks to the richness of the material captured in a single volume, the text is brimming with opportunities to teach critical thinking skills suitable for any History or English course.
— Jason LaBau

The voices of the incarcerated Japanese Americans in When Can We Go Back to America? pack a gut-wrenching punch. Their raw emotions force the reader to step back and consider what it is like to be imprisoned by the US government for an indeterminate amount of time without regard to one’s innocence. The power of their stories compel us to face up to our country’s past, a necessary step towards having a more just society today and in the future.
— Ronald K. Ikejiri

*"At more than 700 pages, this is a truly remarkable, comprehensive resource with an emphasis on allyship, indispensable for researchers and any resistor of injustice."
— PUBLISHERS WEEKLY, STARRED REVIEW

* "Riveting and indispensable...This landmark historical account shines a light on a part of American history that must be remembered."
— KIRKUS REVIEWS, STARRED REVIEW