Young Frankenstein: A Mel Brooks Book Lib/E: The Story of the Making of the Film (Compact Disc) 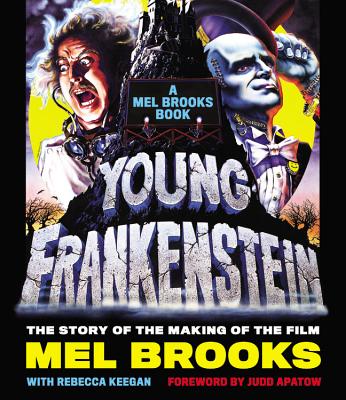 In the year that we mark the passing of Gene Wilder, we celebrate the mad brilliance of Mel Brooks’ iconic 1974 film. With interviews, commentary and more than 200 photos, this is the perfect gift for every film lover from Equinox Mountain to Camel’s Hump. What hump? — Stan Hynds

Mel Brooks' own words telling all about the players, the filming, and studio antics during the production of this great comedy classic. The book is alive and teeming with hundreds of photos, original interviews, and hilarious commentary.

Young Frankenstein was made with deep respect for the craft and history of cinema-and for the power of a good schwanzstucker joke. This picture-driven book, written by one of the greatest comedy geniuses of all time, takes readers inside the classic film's marvelous creation story via never-before-seen black and white and color photography from the set and contemporary interviews with the cast and crew, most notably, legendary writer-director Mel Brooks.

With access to more than 225 behind-the-scenes photos and production stills, and with captions written by Brooks, this audiobook will also rely on interviews with gifted director of photography Gerald Hirschfeld, Academy Award-winning actress Cloris Leachman, and veteran producer Michael Gruskoff.