We Are Not Ourselves: A Novel (Hardcover) 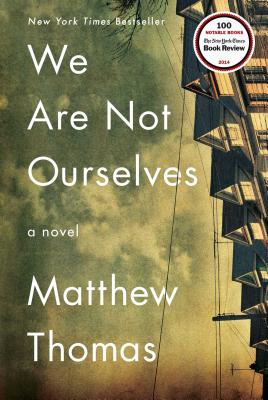 The full impact of this dense yet readable novel doesn't hit until the last few pages. The family story, full of the dark shadows and dappled light of everyday existence, builds from Eileen's dysfunctional, but not abnormal, childhood in 1940s Queens through the next sixty odd years while she builds a life and follows a path she might not have dreamed of. The elusive American Dream is partially realized along with all the twists and turns of choices and events not chosen. Remarkable in its poignant attention to the truth of a life lived to the best of one's ability. — Karen Frank

A quiet story about a family - their hopes, their dreams, their goals, their reality. One of the best books I've read this year! — Liz Barnum

“This is simply the most perfect, brilliantly written novel I have read in a long time! Suspenseful, full of heartwarming moments of lightness and love intertwined with dark moments of foreboding, it is the story of a marriage, a family, and the struggle to attain the American Dream. Most of all, it is the story of Eileen Leary, the daughter of Irish immigrants, and her unwavering strength, love, loyalty, and hopes for herself, her husband, Ed, and their son, Connell. The novel spans from 1951 to 2011 and is set primarily in New York, but the unexpected tragedy that befalls the Learys could happen in any town in any country. Immensely moving and thought-provoking!”
— Maria Roden, Orinda Books, Orinda, CA

Born in 1941, Eileen Tumulty is raised by her Irish immigrant parents in Woodside, Queens, in an apartment where the mood swings between heartbreak and hilarity, depending on how much alcohol has been consumed. From an early age, Eileen wished that she lived somewhere else. She sets her sights on upper class Bronxville, New York, and an American Dream is born.

Driven by this longing, Eileen places her stock and love in Ed Leary, a handsome young scientist, and with him begins a family. Over the years Eileen encourages her husband to want more: a better job, better friends, a better house. It slowly becomes clear that his growing reluctance is part of a deeper, more incomprehensive psychological shift. An inescapable darkness enters their lives, and Eileen and Ed and their son Connell try desperately to hold together a semblance of the reality they have known, and to preserve, against long odds, an idea they have cherished of the future.

Described by The New York Times Book Review as “A long, gorgeous epic, full of love and caring…one of the best novels you’ll read this year,” We Are Not Ourselves is a testament to our greatest desires and our greatest frailties. Through the lives of these characters, Thomas charts the story of the American Century. The result is, “stunning…The joys of this book are the joys of any classic work of literature—for that is what this is destined to become—superbly rendered small moments that capture both an individual life and the universality of that person’s experience” (The Washington Post).

Matthew Thomas was born in the Bronx and grew up in Queens. A graduate of the University of Chicago, he has an MA from the Writing Seminars at Johns Hopkins University and an MFA from the University of California, Irvine. His New York Times-bestselling novel We Are Not Ourselves has been shortlisted for the Flaherty-Dunnan First Novel Prize from the Center for Fiction and longlisted for the Guardian First Book Award. He lives with his wife and twin children in New Jersey.

“The Corrections. The Art of Fielding. Most years, there’s a mega-hyped American epic that’s heralded as a literary breakout. This year’s, a saga about an Irish-American family in Queens, is refreshingly unpretentious but packed with soul—and profoundly moving characters.” —Entertainment Weekly, The Must List

"We Are Not Ourselves is a powerfully moving book, and the figure of Eileen Leary—mother, wife, daughter, lover, nurse, caretaker, whiskey drinker, upwardly mobile dreamer, retrenched protector of values—is a real addition to our literature.”
—Chad Harbach, author of The Art of Fielding

"The mind is a mystery no less than the heart. In We Are Not Ourselves, Matthew Thomas has written a masterwork on both, as well as an anatomy of the American middle class in the 20th Century. It's all here: how we live, how we love, how we die, how we carry on. And Thomas does it with the epic sweep and small pleasures of the very best fiction. It's humbling and heartening to read a book this good."
—Joshua Ferris, author of Then We Came to the End

"Okay, straight out, this novel is the truth, the whole truth, and nothing but. We Are Not Ourselves delivers the deepest, most involving and best pleasures of reading, the pleasures that have you lose your hours while curled up in a comfy couch, that have you sneaking looks and reading when you should be doing other things. A true epic in the best sense of the word, encompassing the big great gorgeous heartbreak that was our American Century. You doubt me. Please do not. Each page is suffused with a relentless and probing genius, as well as a generous and humane heart, and the result not only explodes across the darkening sky, but remains with you long after you've finished the last page and handed it to someone you love. So long as there are novels like We Are Not Ourselves, so long as there are writers like Matthew Thomas, the form of the novel is more than alive, it is thriving, palpitant.”
—Charles Bock, author of Beautiful Children

“In his powerful and significant debut novel, Thomas masterfully evokes one woman’s life in the context of a brilliantly observed Irish working-class milieu….a definitive portrait of American social dynamics in the 20th century. Thomas’s emotional truthfulness combines with the novel’s texture and scope to create an unforgettable narrative.”
—Publishers Weekly, starred review

"We Are Not Ourselves is wonderful on the position of the striving classes and our longings on behalf of our families, and on how we deal with unexpected disaster. It’s as fiercely passionate and big-hearted and memorable as Eileen, its I’m-holding-this-family-together-with-my-two-hands protagonist."
—Jim Shepard, author of Project X and You Think That’s Bad

“[A] devastating debut novel . . . an honest, intimate family story with the power to rock you to your core . . . [a] wrenchingly credible main character . . . rich, sprawling . . . Mr. Thomas’s narrow scope (despite a highly eventful story) and bull’s-eye instincts into his Irish characters’ fear, courage and bluster bring to mind the much more compressed style of Alice McDermott . . . Part of what makes We Are Not Ourselves so gripping is the credible yet surprising ways in which it reveals the details of any neuroscientist’s worst nightmare . . . This is a book in which a hundred fast-moving pages feel like a lifetime and everything looks different in retrospect. As in the real world, the reader’s point of view must change as often as those of the characters . . . This is one of the frankest novels ever written about love between a caregiver and a person with a degenerative disease. The great French film “Amour” conveyed the emotional aspects of such a relationship, but Mr. Thomas spares nothing and still makes it clear how deeply in love these soul mates are.” —Janet Maslin, New York Times

“Astonishing and powerful…Thomas’s finely observed tale is riveting. As a reflection of American society in the late 20th century, it’s altogether epic, sweeping the reader along on a journey that’s both inexorable and poignant.” —People

“the sprawling, brilliant, heartbreaking debut novel by Matthew Thomas, is the story of an American family deeply affected by the father’s early-onset Alzheimer’s, told primarily through his wife, Eileen, a fiercely proud nurse. It’s stunning how this novel — page after unblinking page of seemingly mundane details in the lives of three people— can be so utterly captivating and moving.”
—Minneapolis Star Tribune