How Strange a Season: Fiction (Hardcover) 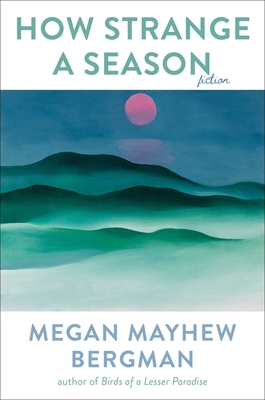 Bergman gets better with every book. This collection of short stories and one novella showcases her skill at creating characters in various stages of adversity. The women who take center stage in her fiction struggle against and in spite of the cards they are dealt. Each of these stories made me think deeply about the desire for meaning and fulfillment. Indigo Run, this collection's crowning achievement, takes place at an ancestral home near Charleston, South Carolina in the early 20th century. Everyone is in some way trapped by their circumstances. The main character thinks to herself, "Practice the art of polite conversation...and know that a woman can die of thirst beside the ocean."

A collection of stories “so beautifully crafted they feel like tiny worlds unto themselves” (Los Angeles Times) about women experiencing all life’s beauty and challenges, from award-winning writer Megan Mayhew Bergman.

A recently separated woman fills a huge terrarium with rare flowers to establish control over a small world and attempt to heal her broken heart. A competitive swimmer negotiates over which days she will fulfill her wifely duties, and which days she will keep for herself. A peach farmer wonders if her orchard will survive a drought. And generations of a family in South Carolina struggle with fidelity and their cruel past, some clinging to old ways and others painfully carving new paths.

In this “closely observed” (The New Yorker) collection, Megan Mayhew Bergman portrays women who wrestle with problematic inheritances: a modern glass house on a treacherous California cliff, a water-starved ranch, and an abandoned plantation on a river near Charleston. “Bergman’s stories are so emotionally rich that they serve as portals into distinct interior worlds...this collection is distinct and vivid...As singular as it is atmospheric” (Kirkus Reviews, starred review).

Megan Mayhew Bergman is the author of Almost Famous Women and Birds of a Lesser Paradise. Her short fiction has appeared in two volumes of The Best American Short Stories and on NPR’s Selected Shorts. She has written columns on climate change and the natural world for The Guardian and The Paris Review. Her work has been featured in The New York Times, The New Yorker, Tin House, Ploughshares, Oxford American, Orion, and elsewhere. She teaches literature and environmental writing at Middlebury College, where she also serves as director of the Bread Loaf Environmental Writers’ Conference. She lives on a small farm in Vermont.

"Stories so beautifully crafted they feel like tiny worlds unto themselves." —LA Times

“Dazzling. . . . a collection of horror stories couched in the glittering worlds of privilege. . . . The women who haunt these pages — former beauties, former athletes, formerly full of potential — have been kneecapped by the patriarchy." —Samantha Hunt, New York Times Book Review, Editor's Pick

"Closely observed. . . . climate change looms, but casting darker shadows are the book’s many absent or inadequate parents." —The New Yorker

"Bergman builds poignant scenarios big and small, from a woman building a terrarium of rare flowers as a heartbreak cure to a peach farmer battling drought."  —Thrillist

“Beautifully crafted stories about strong memorable women wrestling with their histories—both the ones they have chosen and those inherited from society.” —Ploughshares

"Bergman’s characters are unfailingly human—steeped in paradox and grace—and her new collection is pensive, playful, and ambitious. . . . Bergman is a sensitive, essential writer." —The Millions

“The women in How Strange A Season—strong-willed activists, artists, and athletes—have footholds in the past and the future. . . . Climate change lurks like a specter, though not ornamentally; Bergman is a gifted, observant scribe of the natural world.” —Indy Week

“Imaginative and compelling. . . . women of all sorts populate this book: artists, entrepreneurs, shopkeepers, and environmentalists, each realistic in strange and memorable ways.” —Brooklyn Rail

"Bergman’s stories are so emotionally rich that they serve as portals into distinct interior worlds. . . . this collection is distinct and vivid, each story burrowing inside the reader’s brain to leave an indelible mark. As singular as it is atmospheric." —Kirkus (starred review)

"These are stories you want to live in. . . . In a collection perfectly suited for our moment, Bergman examines what remains of what was given to us and suggests how we might move on as the world continues to change around us." —Booklist (starred review)

"Mayhew Bergman is one of the best authors out there for chronicling our tangled, intimate, complicated relationship to the natural world; her elegant, lyrical prose documents an evolving crisis and our incorrigibly human responses to it." —Lit Hub

"An alluring collection centered on women grappling with their circumstances. . . . Bergman emboldens her characters with wit and a shimmering sense of self-awareness. Her attention to details is uncanny. . . . Though alienated from the lives they either once enjoyed or from the futures they yearn for, the characters demonstrate immense mettle. Bergman’s fans will savor each story.” —Publishers Weekly

"An extraordinary, unnerving, and beautiful book. Bergman writes with preternatural wisdom, delivering urgent stories of radical independence and toughness in a world on fire. Like the women who helm them, these stories are ornery and fierce—ready for battle, their teeth filed to points." —Rebecca Makkai, Pulitzer finalist for The Great Believers

“Heartfelt, rich in character and detail, the stories in How Strange a Season feel both modern and timeless.” —Jeff VanderMeer, author of Borne

“A gorgeous collection featuring strong women, or women on their way to becoming strong, often while aiming to do some good. There is an atmosphere here—a kind of skewed quality that makes many of these stories disquieting. And that a storied Southern home could be cursed instead of blessed—this kind of overturned belief abounds in these beautifully written stories.” —Amy Hempel, author of Sing to It

"This is a remarkable collection about women reckoning with the past and insistently forging a future in an often unforgiving, confusing and exacting world. Like all of Megan Mayhew Bergman’s work, How Strange A Season is heart-forward, keen-eyed, haunting, and wonderfully satisfying.” —Cynthia D'Aprix Sweeney, author of Good Company