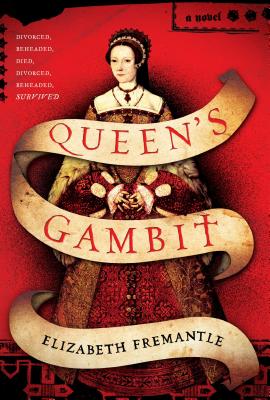 By Elizabeth Fremantle
$26.00
Hard to Find - May no longer be available

The Queen's Gambit by Elizabeth Fremantle is an excellent companion read to Hilary Mantel's Wolf Hall series. Written in the voice of Katherine Parr this novel is well constructed and convincing in tone - (of a 16thc aristocratic, educated woman). More than that, Katherine (who is a fascinating woman) is a well researched, deftly drawn character as are the other historic personages in the story. The Queen's Gambit is about the complexity of politics and marriage, we won't even speak of love in the terrifying last years of Henry the Eighth. — Maeve Noonan

This brilliant historical fiction debut takes you into the heart of the Tudor court and the life and loves of the clever, charismatic Katherine Parr, Henry VIII’s sixth and last wife.

Widowed for the second time at age thirty-one Katherine Parr falls deeply for the dashing courtier Thomas Seymour and hopes at last to marry for love. However, obliged to return to court, she attracts the attentions of the ailing, egotistical, and dangerously powerful Henry VIII, who dispatches his love rival, Seymour, to the Continent. No one is in a position to refuse a royal proposal so, haunted by the fates of his previous wives—two executions, two annulments, one death in childbirth—Katherine must wed Henry and become his sixth queen.

Katherine has to employ all her instincts to navigate the treachery of the court, drawing a tight circle of women around her, including her stepdaughter, Meg, traumatized by events from their past that are shrouded in secrecy, and their loyal servant Dot, who knows and sees more than she understands. With the Catholic faction on the rise once more, reformers being burned for heresy, and those close to the king vying for position, Katherine’s survival seems unlikely. Yet as she treads the razor’s edge of court intrigue, she never quite gives up on love.

Elizabeth Fremantle is the author of Sisters of Treason, Queen’s Gambit, and Watch the Lady, and has contributed to Vogue, The Wall Street Journal, Vanity Fair, The Sunday Times (London), and other publications. She has also reviewed fiction for The Sunday Express. She lives in London, England.

"Spellbinding . . . fascinating . . . Smart, sensual and suspenseful as a thriller, Gambit is a must-read for Philippa Gregory fans--and heralds a brilliant new player in the court of royal fiction."

"This is a superbly written novel . . . Fremantle is surely a major new voice in historical fiction and this book is the answer to the question about what Hilary Mantel fans should read while waiting for the final part of her trilogy."

"In Queen’s Gambit, Parr had hoped, after her much older second husband died, to be able to marry for love. Instead, she finds herself shackled to a violent, ill, grossly overweight Henry, while pining for the handsome Thomas Seymour. Parr is too smart to indulge in an affair like her doomed predecessor, but her reformist religious views could just as easily get her killed. . . . A subplot involving Parr’s maid, Dot Fownten (a real historical figure), is particularly well done. In this case, physical labor aside, downstairs in the palace may be the safer place to be."

“Filled with all the intrigue, fear and secrecy that Tudor-era aficionados love, Fremantle’s earthy, vivid descriptions bring the era and her characters—especially wise and compassionate Katherine—to life.”

“Fremantle’s vivid, finely detailed reconstruction of Katherine Parr’s marriage to Henry VIII is a guaranteed best seller [that] fills the void just when historical fiction fans were beginning to feel the dearth of new works.”

“Intrigue, romance, and treachery abound in Fremantle’s debut novel . . . . This compulsively readable fictional biography of the ultimate survivor is infused with the type of meticulous attention to historical detailing that discerning fans of Alison Weir and Philippa Gregory have come to expect in the Tudor canon.”

"Sins, secrets and guilt dominate the landscape of British writer Fremantle’s debut . . . [her] emphasis is on intrigue, character portraits and the texture of mid-16th-century life. Solid and sympathetic."

"Queen's Gambit is an earthy, vivid portrait of Tudor England seen through the eyes of Henry VIII's last wife Katherine Parr and her loyal maid servant. Elizabeth Fremantle has added a richly written and engrossing novel to the endlessly fascinating story of the Tudors."
— Stephanie Cowell

"Queen's Gambit is a lovely, sensual, subtle read, telling the story of Katherine Parr with both rich imagination and scrupulous attention to factual detail. After reading this historical novel, you truly comprehend what it would mean to be the sixth wife of a dangerous man wielding absolute power. Katherine is no selfless nurse here, nor religious fanatic, but a complex and compelling person who both men and women were drawn to. This is a very impressive novel."
— Nancy Bilyeau

"Beautifully written and finely observed, this suspenseful tale of Henry the Eighth's last wife expertly conveys all the dangerous intensity and passion of the Tudor court."
— Rachel Hore, author of A Place of Secrets

"With a painter’s eye for detail, Fremantle brings the dazzling, dangerous Tudor court to life and sheds an intriguing new light on Katherine Parr, one of history’s great survivors. An enthralling tale of power and passion, loyalty and betrayal."
— Elizabeth Wilhide, author of Ashenden

“All those wives, their fates and Henry's transformation from handsome young monarch to debauched obese tyrant continue to fascinate…Now Elizabeth Fremantle has returned to Henry's court with her debut novel Queen's Gambit."

"The Tudor court comes to life in this gripping story of Katherine Parr, the sixth wife of Henry VIII, where passion, secrecy and betrayal power the suspense."