Olympic Titanic Britannic: The anatomy and evolution of the Olympic Class (Hardcover) 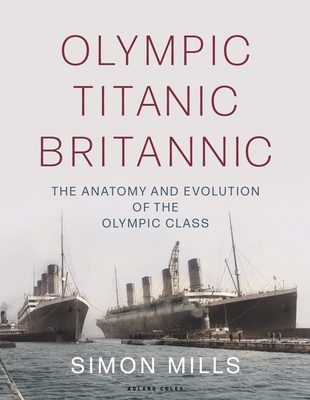 The Titanic. The Britannic. The Olympic. They are some of the most famous ships in history, but for the wrong reasons.

The Olympic Class liners were conceived as the largest, grandest ships ever to set sail. Of the three ships built, the first only lost the record for being the largest because she was beaten by the second, and they were both beaten by the third. The class was meant to secure the White Star Line's reputation as the greatest shipping company on earth. Instead, with the loss of both the Titanic and the Britannic in their first year of service, it guaranteed White Star's infamy.

This unique book tells the extraordinary story of these three extraordinary ships from the bottom up, starting with their conception and construction (and later their modification) and following their very different careers. Behind the technical details of these magnificent ships lies a tragic human story – not just of the lives lost aboard the Titanic and Britannic, but of the designers pushing the limits beyond what was actually possible, engineers unable to prepare for every twist of fate, and ship owners and crew who truly believed a ship could be unsinkable.

This fascinating story is told with rare photographs, new computer-generated recreations of the ships, and unique wreck images that explore how well the ships were designed and built. Simon Mills offers unparalleled access to shipbuilders Harland & Wolff's specification book for the Olympic Class, including original blueprints and - being made widely available for the first time - large fold-out technical drawings showing how these extensive plans were meant to be seen.

Simon Mills has worked in the camera department of the British film industry since 1980. He has worked on over 70 feature films, television dramas and documentaries, including several James Bond, Indiana Jones and Harry Potter films, and as a qualified HSE scuba diver has, from time to time, also worked beneath the surface.

In addition to his camerawork he has helped to research a number of maritime-themed documentaries, authored or edited 11 books, and has for many years written articles on the Britannic and the Olympic class liners for maritime periodicals. All of this now takes second place to coordinating the development of the Britannic project, the wreck of which he bought in 1996.