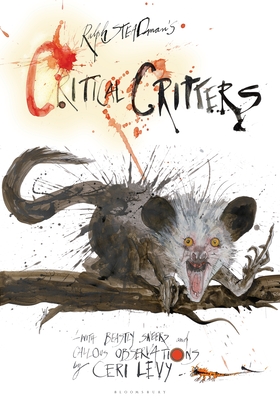 Following on from Extinct Boids and Nextinction, Critical Critters is the third in this epic trilogy of books dedicated to extinct and critically endangered animals from cartoonist Ralph Steadman and film-maker Ceri Levy - the GONZOVATIONISTS.

Expect plenty more of what made the first two books so successful - unpredictable nonsense beasts, irreverent jokes, a diary-style record of the creative mayhem, and around 100 spectacular illustrations by Ralph of critically endangered mammals, insects, fish, lizards and trees – a stunning collection, with a serious conservation message.

RALPH STEADMAN was born in 1936. He began his career as a cartoonist, and through the years has diversified into many creative fields. Ralph collaborated with Dr Hunter S. Thompson in the birth of 'gonzo' journalism, with Fear and Loathing in Las Vegas; he has illustrated classics such as Alice in Wonderland, Treasure Island and Animal Farm, and written and illustrated his own books, which include Sigmund Freud, I Leonardo and The Big I Am. Steadman is also a printmaker, and has travelled the world's vineyards, culminating in his books The Grapes of Ralph, Untrodden Grapes and Still Life with Bottle. Steadman's recent books for Bloomsbury include his epic collection of bird illustrations, Extinct Boids.

CERI LEVY is a film-maker, who started out making music videos before moving into the world of documentaries. His works include Bananaz, a film about the inner machinations of the group Gorillaz, and the forthcoming The Bird Effect; he is also co-curator of Ghosts of Gone Birds, and therefore a crucial cog in the boids' creation myth.

“[Steadman's] wonderfully idiosyncratic style captures the animals in a way no camera could, his paintings positively fizzing off the page.” —BBC Focus

“From grumpy mountain gorillas to the humble red squirrel, Steadman gives amazing life to creatures that might not be around much longer.” —Big Issue North

“A brilliant book that will satisfy conservationists and art-lovers alike.” —Daily Mail