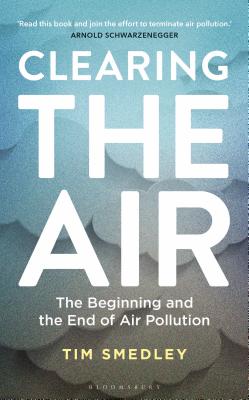 "Read this book and join the effort to terminate air pollution."--Arnold Schwarzenegger, 38th Governor of California

The story of what's happened to the air we breathe, the impact it has had on our health and what we can do to fight back.

Clearing the Air tells the full story of what's happened to the air we breathe. Sustainability journalist Tim Smedley explains exactly what air pollution is, which chemicals are the dangerous ones and where they come from. He interviews the scientists and politicians at the forefront of air pollution research as well as those whose lives have been affected by smog. This groundbreaking book reveals the extreme instances of air pollution that have happened around the world, including London, Beijing, Delhi and LA, as well as examining recent stories like the VW diesel scandal.

Globally, 18,000 people die each day from air pollution. For the most part, air pollution is anonymous; an invisible killer borne from the cars in our driveways and the industrial processes used to make stuff, but there is so much we don't know. Parents on the school run in their 4x4s have never been told that the pollution inside the car is 5 times worse than that on the street outside, or that studies show how air pollution stunts lung growth in children.

Around the world, more than eight-out-of-ten people who live in cities breathe in concentrations of air pollutants that exceed international air quality guidelines. The annual number of deaths--6.5 million--is far greater than those from HIV/AIDS, tuberculosis, malaria and car crashes combined, and it is getting worse. These problems can be solved, and the message of the book is positive. The overwhelming majority of air pollutants are local, short-lived, and can be stopped at source; the benefits to health, instant and dramatic. There are many stories that show how the fightback against air pollution can and does work, and we can all play a part to clear our air.

Tim Smedley is an award-winning sustainability journalist. After ten years in London--first as a business journalist, latterly as a freelancer writer covering the environment--he left in 2014, fleeing the polluted streets for Oxfordshire where he is now based. At first, air pollution was just another environmental story to file. But air pollution seemed to get under his skin and into his veins--literally, as it turned out--and the more he researched, the more concerned he became. Never before had an environmental story come as close to home as this.

Tim has written for the Financial Times, the Guardian, The Sunday Times, New Scientist, and most recently the BBC. Clearing the Air will be his first book.

“Air pollution is a serious problem that we all have the power to solve. Tim Smedley's book, Clearing the Air, shows how the fightback against air pollution works. Tim's book is action-packed and his global journey of discovery uncovers the real heroes who are taking a stand and fighting for their right to breathe clean air. Read this book and join the effort to terminate air pollution.” —Arnold Schwarzenegger, 38th Governor of California

“Whether describing Paris's Journee sans Voiture or electric buses in Beijing and Milton Keynes, Clearing the Air not only suggests that tackling pollution is possible, but also shows how, in many places, the work is already being done. In a news cycle that increasingly informs us that all hope is lost, it is uplifting to read that Smedley, an award-winning sustainability journalist, does not think so.” —Times Literary Supplement

“Clearing the Air is incredibly well researched with plenty of numbers and facts to back up Smedley's arguments. This is an important book and one that I whole-heartedly recommend. Even if politicians are slow to take measures about the air quality where you live, Clearing the Air will help you to play your part in creating a cleaner and healthier future.” —Chemistry World

“Clearing the Air sets out in simple terms the monumental damage that dirty air is causing to us and our environment. It also gives us the remarkably simple, logical solutions that need embracing across the world. Compulsory reading.” —Chris Boardman, Olympic Gold Medallist and Greater Manchester's Cycling and Walking Commissioner

“Tim Smedley's indignation about the years of cover-ups and lies by governments and corporations is well founded. There are scientific details packed between the covers of this personal account – atmospheric chemistry, automative engineering, health effects and much more. The technical details are woven seamlessly into the story. It left me with a growing feeling of hope: people around the world are demanding breathable air!” —Mary Nichols, Chair of the California Air Resources Board (CARB)

“A wonderfully written book that takes you through the fascinating and terrifying story of air pollution, and explains how billions of people unwittingly ended up breathing toxic air. What Tim does so well is to articulate a simple truth that ultimately leaves you with hope: it doesn't have to be this way. Air pollution is a man-made problem and Clearing the Air sets out the simple steps that governments and individuals must take to ensure that everyone can breathe clean air. Read it and take action!” —James Thornton, CEO, ClientEarth

“A thoughtful, worthwhile book that fulfils the important role of observing air pollution across widespread regions of the world. China is not the first country to experience the environmental impacts of industrialization, and it will not be the last.” —Ma Jun, Director of the Institute of Public and Environmental Affairs, Beijing, China