Hitler’s Winter: The German Battle of the Bulge (Hardcover) 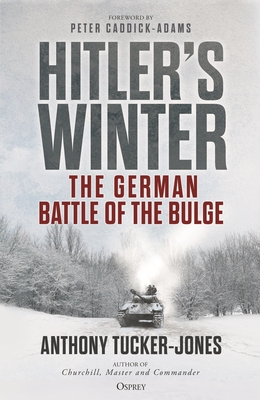 'What a brilliant book this is… a terrific narrative of Hitler's Ardennes offensive of December 1944 – superb storytelling that achieves a skilful balance between drama and detail.' - James Holland

The Battle of the Bulge was the last major German offensive in the West. Launched in the depths of winter to neutralize the overwhelming Allied air superiority, three German armies attacked through the Ardennes, the weakest part of the American lines, with the aim of splitting the Allied armies and seizing the vital port of Antwerp within a week. It was a tall order, as the Panzers had to get across the Our, Amblève, Ourthe and Meuse rivers, and the desperate battle became a race against time and the elements, which the Germans would eventually lose. But Hitler's dramatic counterattack did succeed in catching the Allies off guard in what became the largest and bloodiest battle fought by US forces during the war.

In this book, Anthony Tucker-Jones tells the story of the battle from the German point of view, from the experiences of the infantrymen and panzer crewmen fighting on the ground in the Ardennes to the operational decisions of senior commanders such as SS-Oberstgruppenführer Josef 'Sepp' Dietrich and General Hasso von Manteuffel that did so much to decide the fate of the offensive. Drawing on new research, Hitler's Winter provides a fresh perspective on one of the most famous battles of World War II.

Anthony Tucker-Jones, a former intelligence officer, is a highly prolific writer and military historian with well over 50 books to his name. His work has also been published in an array of magazines and online. He regularly appears on television and radio commenting on current and historical military matters.

“Anthony Tucker-Jones's study of these battles is timely and important.” —Professor Peter Caddick-Adams, author of 'Snow and Steel: Battle of the Bulge 1944–45'

“What a brilliant book this is… a terrific narrative of Hitler's Ardennes offensive of December 1944 – superb storytelling that achieves a skilful balance between drama and detail.” —James Holland, author of 'Brothers in Arms'

“Tucker-Jones has delivered another gem. Hitler's Winter takes the reader on a breath-taking ride from the “other side of the hill” and is a must-read compendium to the vast corpus of Allied accounts of the Battle of the Bulge. Simply stunning.” —David O'Keefe, author of 'Seven Days in Hell'

“Anthony Tucker-Jones offers a fresh insight into the Battle of the Bulge that few historians have matched. Although several books have been written about the Ardennes from the German perspective, very few authors have captured the spirit of the conflict through the eyes of the combatants themselves.” —Mike Guardia, author of 'Arracourt 1944: Triumph of American Armor'

"An excellent themed analysis of why the objectives set by Hitler could never be achieved." - Aspects of History

"For those who want to fully understand the Battle of the Bulge, then this is a 'must read'." - Iron Cross