The Battleship USS Iowa (Anatomy of The Ship) (Hardcover) 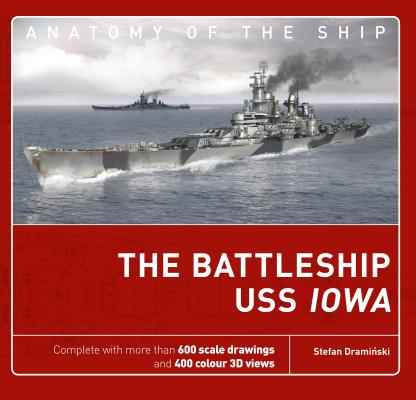 A brilliantly detailed visual representation of one of the greatest US warships, the USS Iowa, whose four decades in service took her from the Pacific War in World War II to the Persian Gulf in the late 1980s.

USS Iowa (BB-61) was the lead ship in one of the most famous classes of battleships ever commissioned into the US Navy. Transferred to the Pacific Fleet in 1944, the Iowa first fired her guns in anger in the Marshall Islands campaign, and sank her first enemy ship, the Katori. The Iowa went on to serve across a number of pivotal Pacific War campaigns, including at the battles of the Philippine Sea and Leyte Gulf. It ended the war spending several months bombarding the Japanese Home Islands before the surrender in August 1945.

After taking part in the Korea War, the Iowa was decommissioned in 1958, before being briefly reactivated in the 1980s as part of President Reagan's 600-Ship Navy Plan. After being decommissioned a second and final time in 1990, the Iowa is now a museum ship in Los Angeles.

This new addition to the Anatomy of the Ship series is illustrated with contemporary photographs, scaled plans of the ship and hundreds of superb 3D illustrations which bring every detail of this historic battleship to life.

Stefan Draminski was born in 1982 and is a naval researcher and illustrator. Since 2002 he has worked on numerous publications on military history subjects. Using 3D software, he creates highly detailed and historically accurate digital models of warships, aircraft and vehicles. His particular interest in the Imperial Japanese Navy has led him to learn Japanese. He lives in Torun, Poland, with his wife, children, and dog.