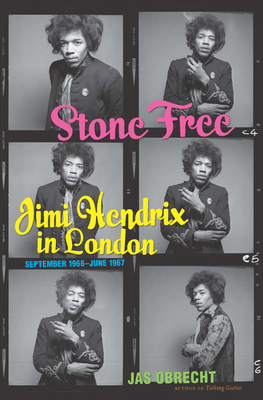 By Jas Obrecht
Call or email to see if a used copy is available.
Out of Print

In the midst of the pandemic, I've heard that people have been turning to “the classics” for solace. So it was for me that when this book came across my desk, it was obvious that a book about one of the all time classics was just what I needed . I have read several works on Hendrix but Jas Obrecht's approach is perhaps the most astute. Focusing on Jimi's nine month launch into superstardom in London from '66 to '67 shines a light on one of the most remarkable periods in rock history, when a 23 year old Hendrix went from unknown fledgling with a handful of supportive friends to writing the mind-numbing array of material- while in London- for his debut album that would turn the rock/guitar/social order on its head. These were Jimi's true “supernovic” moments and his unique soul and creative genius as well as the horrible racism encountered are all brought to life here vividly.

A compelling portrait of rock's greatest guitarist at the moment of his ascendance, Stone Free is the first book to focus exclusively on the happiest and most productive period of Jimi Hendrix's life. As it begins in the fall of 1966, he's an under-sung, under-accomplished sideman struggling to survive in New York City. Nine months later, he's the toast of Swinging London, a fashion icon, and the brightest star to step off the stage at the Monterey International Pop Festival. This momentum-building, day-by-day account of this extraordinary transformation offers new details into Jimi's personality, relationships, songwriting, guitar innovations, studio sessions, and record releases. It explores the social changes sweeping the U.K., Hendrix's role in the dawning of flower power, and the prejudice he faced while fronting the Jimi Hendrix Experience. In addition to featuring the voices of Jimi, his bandmates, and other eyewitnesses, Stone Free draws extensively from contemporary accounts published in English- and foreign-language newspapers and music magazines. This celebratory account is a must-read for Hendrix fans.