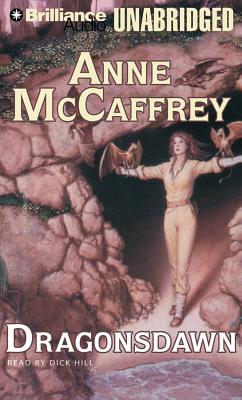 This is book number 9 in the Dragonriders of Pern series.

In Pern, dragons fly overhead, protecting the people from the poisonous Threadfall, and many have wondered where these great creatures came from. Ancient legends say the were once tiny creatures known as Fire Lizards, but no one believes that - until Menolly finds them. — Leah Moore

The beautiful planet Pern seemed a paradise to its new colonists--until unimaginable terror turned it into hell. Suddenly deadly spores were falling like silver threads from the sky, devouring everything--and everyone--in their path. It began to look as if the colony, cut off from Earth and lacking the resources to combat the menace, was doomed.

Then some of the colonists noticed that the small, dragonlike lizards that inhabited their new world were joining the fight against Thread, breathing fire on it and teleporting to safety. If only, they thought, the dragonets were big enough for a human to ride and intelligent enough to work as a team with a rider....